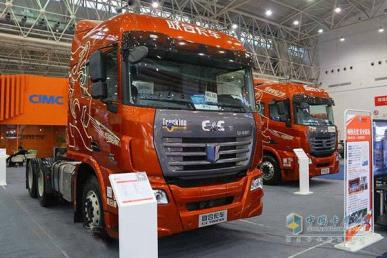 As a newly released truck model with large horse power in 2015 , the new U series 480 horse-power 6X4 locomotive is equipped with YC6K12 engine, Fast 12-speed transmission gearbox, one main oil tank and one auxiliary fuel tank. According to the company, its two fuel tanks can hold up to 800L fuel at the maximum.

The new U series 460 horse power 6X2 locomotive may not be unfamiliar to people working in the truck industry. Having just successfully finished the operation on the so-called evil slope in southwest China without the installation of water tank and the help of brakes, the truck has raised many eyebrows among the visitors. Equipped with YC6K12 engine, transmission gearbox with overdrive, one major fuel tank, one auxiliary fuel tank, Jacobs in-cylinder braking system, Voith hydraulic retarder, real-time monitoring system at blind spot, alarming system for route deviation and a number of other state-of-art technologies, 6X2 locomotive achieves excellent power level and high safety standards. Undaunted, it is fully prepared to challenge any treacherous road.

As a classic truck model, U420 boasts a number of strengths, including low repair & maintenance costs, high fuel economy, high safety standards, high comfort level. Having passed ADR European Standard Certificate for the transportation of dangerous chemicals, it has raised the safety bar to the highest level and is undoubtedly the leader in the transportation of dangerous chemicals.