CHINA, October 20 /chinatrucks.com/ -- On October 15, a ceremony was successfully held in Shenzhen, Guangdong for the signing of a global license agreement between CIMC and Siemens Digital Industries Software. Li Guiping, CEO and President of CIMC, Liang Naiming, Senior Vice President of Siemens Digital Industries Software and representatives of both parties were present at the ceremony. 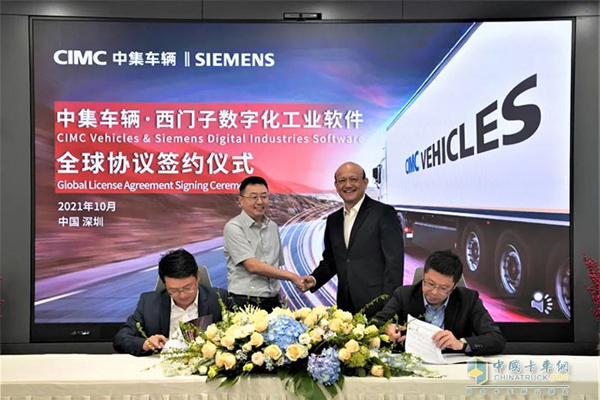 Li Guiping, CEO and President of CIMC, said that the move towards digitalization is in line with CIMC’s strategy. Before CIMC move into the “deep water zone”, it is important to consider that digitalization is often a prerequisite for high-end manufacturing. As the world’s first manufacturer of high-end A+H semi-trailers and special purpose vehicles, CIMC has been committed to continuing the further innovation-driven development and transformation towards digitalization. By 2025, it aims to realize the strategy plan for advanced manufacturing and new infrastructure construction, opening a new chapter as a leader in China’s smart and high-end manufacturing. 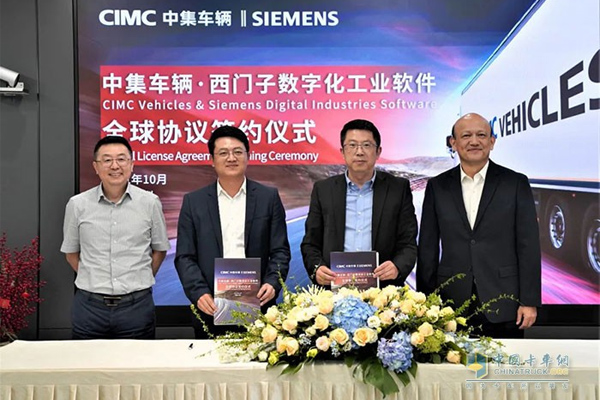 According to Li Xiaofu, Chief Technology Officer of CIMC, technologies like Virtual Reality, big data, Internet of Things are being used in the "Lighthouse" factories and production is largely automated and flexibly. With these emerging technologies, those typical problems they face previously with backward production equipment, technical delays, increased labor costs, and carbon emission and energy saving have all been solved. This has also been regarded as a move to accelerate the automobile industry towards smart manufacturing from traditional manufacturing.

Li Xiaofu added that since the cooperation began in late 2014, CIMC Vehicles and Siemens Digital Industries Software have been expanding the cooperation scope from consulting and planning to POC verification, then to a complete construction of systems for applications on semi-trailers, upbody of special-purpose vehicles and refrigerators.

The two parties have carried out more and more extensive and in-depth cooperations in the fields from CAD and CAD+PLM applications to integration of design process and modulization of configurations. The agreement that CIMC and Siemens Digital Industries Software signed on October 15 marks a new stage in cooperation between the two parties. As CIMC moves towards digital transformation in its operations, the two parties will work together to address multitful business challenges in the process.