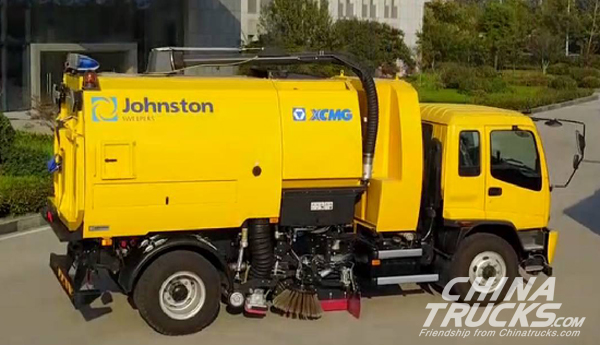 As an important engine of world economy, China has attracted the attention of Johnston Sweepers. After reviewing many Chinese manufacturers, Johnston Sweepers shared the same goals and philosophy with XCMG who also had profound historical and cultural heritage and experienced more than 70 years of extraordinary development. The golden standard of “leading technology and everlasting products” has deeply impressed Johnston Sweepers’ staff. The cooperation has started between Johnston Sweepers and XCMG since then.

The road sweepers have been applied in China for 20 years. During this period, the road sweepers have been greatly developed both in technology and process. However, they were quite insufficient in humanization and intellectualization compared with foreign ones. XCMG Environment Technology has deeply tapped user requirements, worked with Johnston Sweepers with overall high-end orientation to solve the pain point in domestic road sweepers, and introduced the product technology of “the most powerful road sweeper in the world”. The series of products have established the quality standards of global vehicle-mounted vacuum sweeping twin-engine road sweepers. 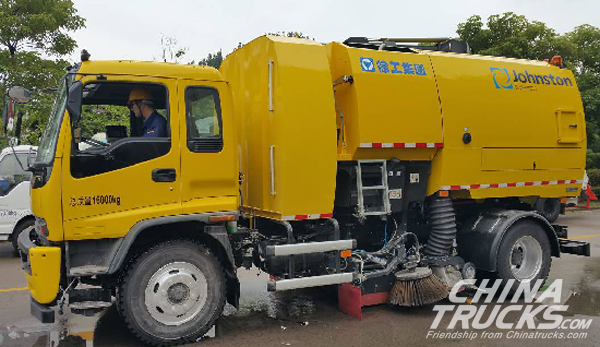 The product is positioned at the domestic high-end market. Fan hydraulic coupling of 1:1 power transmission efficiency realizes the maximum suction in the industry and guarantees unchanged 20-year performance. The sweeping system is equipped with “two suction reels + large diameter pipette” to enhance suction and anti-blocking effect. The design of “two sweeping reels + middle rolling sweeping” expands sweeping width to 3.6m. The area of sweeping and collecting rubbish can be more extensive than that of in the ordinary sweeper within the same time period. It also boasts the patented closed hydraulic variable speed system to provide strong dust suction power when the vehicle is in the lower engine speed.

Meanwhile, the sweeping reels are equipped with a retracting mechanism; that is to say, when it encounters a hard object, the brush can be retracted to protect both the vacuum sweeper and the roadside building. The unique cabin design not only allows the dirt and dust to be filtered out from the vacuum sweeper, but also ensures the air discharged outside the cabin is clean.

In addition, the top of the trash can is equipped with a rotating elastic sucker of 270 degrees to suck up rubbish in gaps and sewers. Hydraulic electric modular design is convenient for maintenance and CAN-BUS can realize system self-diagnosis and data downloading.

The products smoothly off the assembly line are another example of XCMG drawing lessons from foreign advanced technologies and are put into operation as soon as off the assembly line. XCMG will accelerate its independent research and development process, continue to strengthen environmental sanitation products, and further expand the high-end market in China. (www.chinatrucks.com)