As part of a wider rollout of brand new zero emission vehicles, Volkswagen has announced a new cargo van concept with a hydrogen fuel cell-powered drivetrain. The Crafter HyMotion was designed with longer journeys in mind, and boasts a larger payload capacity than its electrically powered predecessor, the e-Crafter launched by VW in 2016. 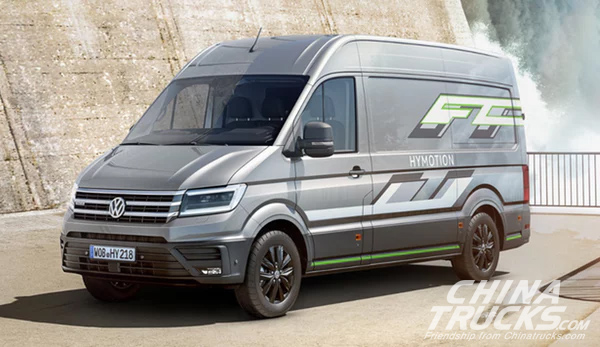 The e-Crafter was cooked up with shorter city trips in mind, like those carried out by couriers and tradesman, using its onboard lithium battery to cover 173 km (107 mi) on each charge. The Crafter HyMotion features the same 100-kW electric motor and gearbox, but draws on 7.5 kg hydrogen tanks to cover ranges exceeding 500 km (310 mi). Fuel consumption is listed a 1.4 kg (3 lb) of hydrogen per 100 km (62 mi), and re-fueling takes as little as four minutes.

VW says the Crafter HyMotion can carry the same payloads as today's diesel-powered vehicles, and it joins a growing list of hydrogen-powered cargo vans and heavy haulers under development from big-name automakers, such as the H350 concept from Hyundai and the Project Portalfrom Toyota. With the promise of long ranges and quick fuel stops, these hydrogen fuel cell vehicles would be well suited to delivery of goods over greater distances. 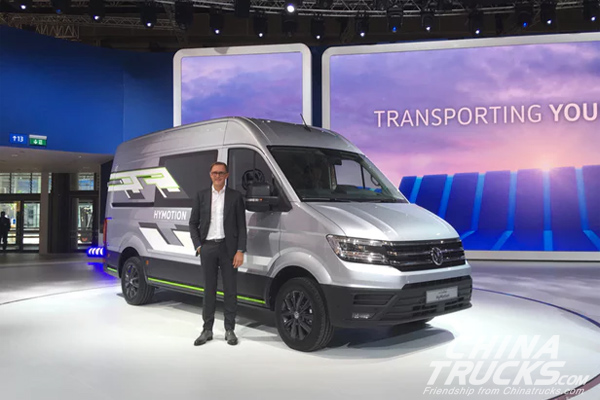 But VW is very much taking a big picture view of the current state of affairs. Hydrogen fuel cell vehicles are more costly to produce than electric vehicles at the moment, though it expects the manufacturing costs to lower and be about the same as conventional electric vehicles by the year 2025. By that time, it also expects hydrogen re-fueling stations to be grow in abundance, to number around 400 in Germany by 2023 compared to the 50 found there today.

To that end, the Crafter HyMotion remains a concept vehicle for now, though VW says the technology is near-production and waiting in the wings should the infrastructure spring up and the components lower in cost to make such vehicles more viable. (www.chinatrucks.com)