www.chinatrucks.com: Recently, Great Wwall Motor's first batch of 48 Wingle 5 pickups have directly gone aboard a logistics train at China customs bound for GWM's 4S store in Russia. This is the first time that GWM's vehicles were directly transported to Russia by railway without transit. The move will significantly simplify GWM's formalities for exporting vehicles to Russia and facilitate GWM's export to Russia. 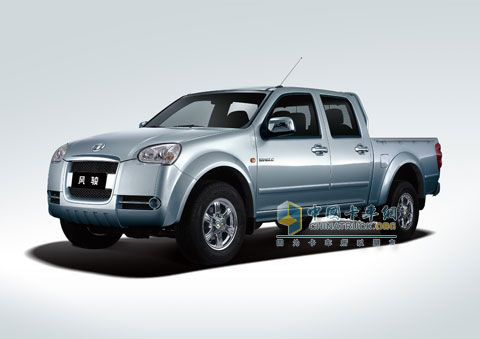 According to Russian Railway Logistics (a subsidiary of Russian Railways), to facilitate its loading and transport of GWM's vehicles in China, the Zabaikalsk Railway Bureau coordinated the special technical regulations with Chita Customs, which will help increase the monthly volume of freight from Manzhouli Port to Zabaikalsk to some 400 vehicles.

Before coordinating the technical regulations, GWM's vehicles had to exit onboard plate trailers of the Chita Railway Bureau after arriving at Manzhouli Customs, but the number of plate trailers was limited, vehicles were often detained in Manzhouli for a period of time before plate trailers were available, and after exiting, still needed to be transported by "сетка" means "cage cars" of the Chita Railway Bureau to GWM's 4S store in Russia. But now, "сетка" can pull into Manzhouli Customs so that GWM's vehicles can exit directly by "сетка". In this way, the time of awaiting plate trailers and some expenses has been saved, and the warehousing expense for vehicle detainment has been reduced.

According to sources with the International Department of GWM, GWM's Haval SUVs and Wingle pickups sell well in Russia. To date, GWM's market inventory in Russia has been close to 90,000 units. To meet market demand, GWM's Russian distributor Irito contacted the railway department to directly transport imported models from Manzhouli Customs to Russia without transit.

Now the overseas strategy of proprietary brands has entered a critical stage. According to statistics released by the China Association of Automobile Manufacturers, China exported 1.056 million units in 2012, up 29.7 percent year on year. The top three export destinations are ASEAN, Russia and Algeria, which contributed 10.8 percent, 9. 2 percent and 7.5 percent of total exports respectively. Amid the slump in the European economy, Russia's pivotal role has become increasingly prominent as the export market of Chinese vehicles second to ASEAN only.

According to sources, GWM has grown rapidly in Russia in recent years, with its sales soaring year by year in the competition against world leading automakers. In 2012, GWM sold over 24,000 units in Russia, up 24.8 percent year on year, ranking first in exports to Russia among Chinese proprietary brands. With the support of Russia's logistics policy, GWM will further gain an upper hand in the market.