Award-Winning VIAB Turbo Retarder Clutch
The VIAB Turbo Retarder Clutch is one of the most prominent Voith products at this year's IAA. It combines turbo coupling and retarder in one hydrodynamic circuit and thus ensures wear-free starting and braking. This allows highly sensitive maneuvering and starting of the vehicle even with particularly heavy loads and on difficult terrain. The system is more compact, lighter and more efficient than conventional torque converter clutches and does not overheat even during intensive maneuvering, on uneven ground or starting at extreme inclines while the vehicle is fully laden. Efficiency, sustainability and fuel economy were in the foreground during the development of this cutting-edge system, which is now also available for the Mercedes-Benz Arocs construction truck. The readers of the trade magazine Logistra recently voted the VIAB as "Best Practice Innovation 2014“.

Braking with Water - the Aquatarder SWR
At the center of the Voith exhibition appearance at the IAA are also the Aquatarder SWR and the Voith DIWA.6 automatic transmission. Both products are energy-efficient, resource-sparing components for buses, coaches and trucks. The Voith Aquatarder SWR is the first secondary retarder to brake with water, using the cooling agent of the engine for the process. This means that it does not need an additional operating medium and is able to perform up to 90 percent of all vehicle braking operations wear-free. In addition, it requires only half the installation space compared with its predecessor - the Aquatarder SWR is 35 kg lighter. The braking system has already made a name for itself on several occasions. In 2013 the Aquatarder SWR was awarded with the ECW Innovation Label at Busworld in Kortrijk, Belgium. In 2012, the publishing house Huss Verlag in Munich presented the Aquatarder SWR with the European Transport Prize fir Sustainability for outstanding achievements in the commercial vehicle industry.

DIWA.6: the Best Choice for City and Long-Distance Buses
The new DIWA.6 automatic transmission is Voith's response to the rising demand for clean and fuel-efficient vehicles, especially in the context of the Euro-6 requirements. Specifically developed for citybuses, DIWA automatic transmissions are the best prerequisite for economical operations. Compared with its predecessor model, the DIWA.6 can save almost another five percent fuel. Apart from utilizing the topography-dependent gear-shifting program SensoTop, this is made possible by the need-based reduction of the operating pressure and an intelligent start-up management that avoids starting against the active service brake. With the optimized Automatic Neutral Shift (ANS) function the transmission can stay decoupled from the engine for longer, which also saves fuel. Numerous bus operators in Europe rely on the transmission in demanding inner city traffic. Among the customers of the DIWA.6 automatic transmission are, for example, Wiener Linien and the three Belgian operators Maatschappij voor het Intercommunaal Vervoer te Brussel (MIVB/STIB), VVM-De Lijn and Société Régionale Wallonne du Transport (SRWT)

Air Compressors for Euro-6 Engines
The air compressors type LP 725 and LP 490 shown on the stand have also been developed for the new EURO-6 engines. Produced in aluminum lightweight design, the two-stage compressors are a series-feature of the latest Daimler engine generation. This includes the Mercedes-Benz Actros and Antos, as well as the Travego and Citaro. Thanks to its two-stage principle, the Voith air compressor saves up to 1 liter of diesel per 100 kilometers. Since 2012, Voith has produced over 100,000 air compressors at its location in Zschopau, which are in service in buses and trucks all over the world.

Designed for the Chinese Market: VR 115 CT Hydraulic Retarder
Voith also presents the first locally-produced hydraulic retarder for China, the VR 115 CT (China Truck). It has been designed specifically for Chinese trucks, is very robust and fully geared towards the working environment of heavy trucks in China. The new retarder offers higher economic advantages than local Chinese products and engine brakes. It meets the requirements of the Chinese domestic customers on high braking quality for trucks as well as high economy due to shorter payback times. 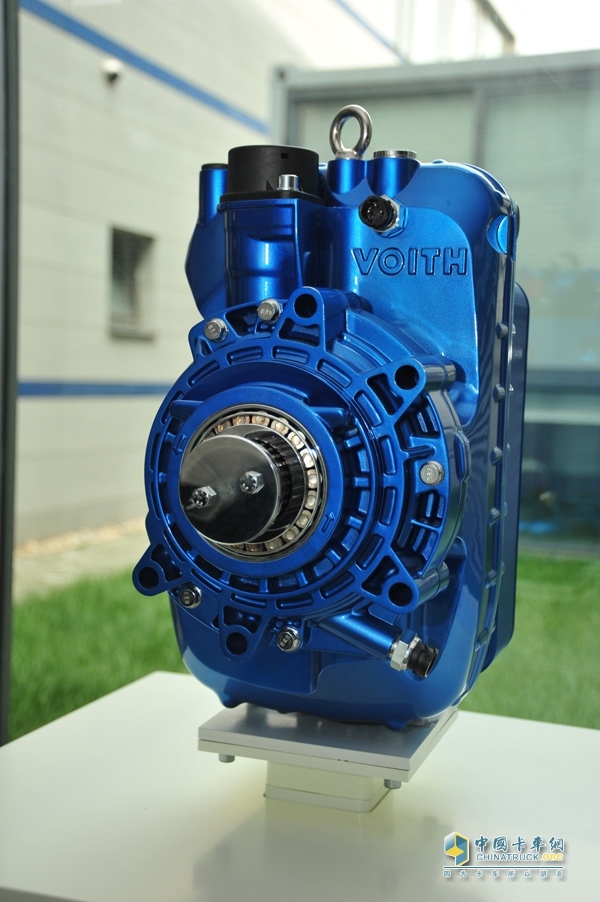 The VR 115 CT is very compact and weighs only 48 kg. Thanks to its parallel design it is suitable for a wide range of transmission types. Due its simple construction in modular design, combined with high accessibility in the vehicle, the VR 115 CT, which is produced exclusively in China, is extremely maintenance and service friendly.

Remanufactured by Voith
Apart from offering technical support and comprehensive advice, the worldwide Voith service network also provides spare parts and exchange units "remanufactured by Voith“. The Voith exhibition stand will therefore also feature an example of a fully overhauled 115 HV Retarder. With this exchange retarder, the operator gets a unit that is on the same technical level as a new one. With the telemetric system DIWA SmartNet 2.0 Voith also presents a future-oriented solution for transmission diagnosis. With this new generation, data can now also be transmitted via W-LAN, which results in significant savings compared to the mobile radio solution.

Multimedial Show Concept
The benefits and the high performance of the Voith components are illustrated at the Voith exhibition stand not only through full-size exhibits and product animations but also by multimedial presentations. In these media clips, end users and operators from South America, Europe and Asia have their say, talking about their experiences with the products and services from Voith in everyday business life.

Voith Turbo, a Group Division of Voith GmbH, is a specialist for intelligent drive solutions. Customers from highly diverse industries such as oil and gas, energy, mining and metal processing, ship technology, rail and commercial vehicles rely on advanced technologies from Voith Turbo.

Voith (voith.com) sets standards in the markets energy, oil & gas, paper, raw materials and transportation & automotive. Founded in 1867, Voith employs almost 43 000 people, generates 5.7 billion in sales, operates in about 50 countries around the world and is today one of the biggest family-owned companies in Europe.