GERMANY(chinatrucks): Hyundai and IVECO present the first fuel cell large van at IAA in Hannover as their partnership develops. 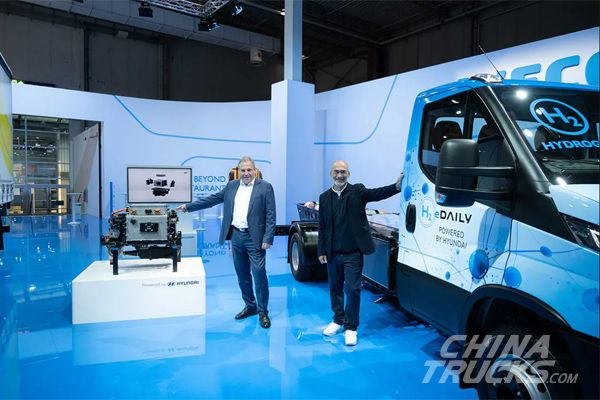 Hyundai and Iveco Group have ambitious sustainability goals, as demonstrated by their individual commitments, and are leveraging their collaboration to help accelerate the transition towards net zero carbon.

Since signing a Memorandum of Understanding (MoU) in March 2022, they have formed multiple joint working groups on various technological streams to explore ways that they can complement each other on the development of electric vehicles and alternative propulsions.

The GVW 7.2 ton prototype has been tested in Europe, confirming a driving range of 350 km, maximum payload of 3 tons and a refueling time within 15 minutes. While eDAILY BEV, also launched today at the IAA, is best suited for short journeys, eDAILY FCEV will be an ideal option for longer deliveries where high payload and long range is necessary.

An integral part of the eDAILY FCEV is the battery pack by FPT Industrial, the powertrain brand of Iveco Group, while the fuel cell system provided by Hyundai is the latest step in the company’s 20+ year hydrogen mobility journey.

Hyundai’s advanced fuel cell technology is already in use in various applications, and especially in the commercial vehicle sector. The system logged over 4.5 million km in Switzerland on heavy duty trucks showing its powerful performance and reliability.

The slogan “Engineered by Iveco Group, powered by Hyundai” reflects this mutually beneficial cooperation and will also be the driver for similar future initiatives.

Following the recent announcement that IVECO BUS will equip its future hydrogen-powered buses with our fuel cells, the hydrogen-powered eDAILY is another concrete example of what we can accomplish by working together in accelerating the transition to carbon neutrality.

“The partnership formed between the two companies has proven to be very successful and we expect greater results in the coming years.”

On the day we are announcing that our battery-electric eDAILY project has come true, we are thrilled to present the first hydrogen-powered eDAILY to the world.

“Based on this prototype, we aim to roll out a small series of FCEV vans for trial with selected customers by the end of next year. This exciting milestone in our sustainability journey is an outcome of the successful collaboration between Iveco Group and Hyundai Motor Company and shows how we can achieve tangible results in a short timeframe by combining our strengths.”

Hyundai and Iveco Group are also examining other collaboration options, ranging from cross-selling products in selected worldwide regions to joint developments in vehicle automation and connectivity. Additionally, Hyundai is also considering sourcing opportunities from FPT Industrial in the area of next generation conventional powertrains for commercial vehicles.

Developments like these demonstrate the companies’ commitments to pursuing every valuable opportunity and the two parties are confident that the ongoing projects will give results in the near future.

The eDAILY FCEV is on display at the IVECO’s booth located in Hall 24, Deutsche Messe AG, at the IAA Transportation from September 20 to 25.

Hyundai and IVECO present the first fuel cell large van at IAA in Hannover as their partnership develops, September 19, 2022