On November 1st, in Wuhan, the “China Commercial Vehicles Show 2019” was opened, which will last until November 4th inclusively. Among the exhibits there are autonomous trucks, freight transport, special vehicles, new energy vehicles, as well as auto parts. 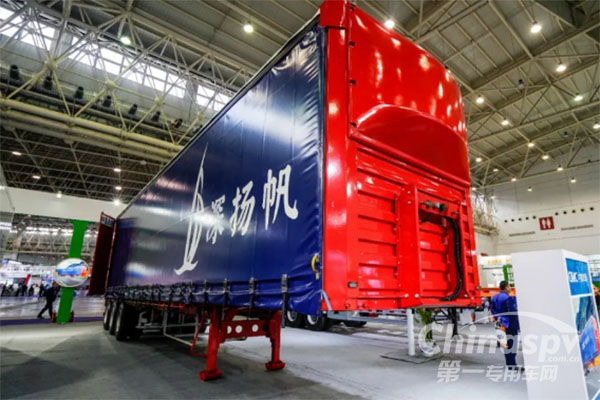 As a leader in the semi-trailer segment, CIMC officially launched its “second generation semi-trailer” (13m gooseneck fence trailer with 40ft three-axle multifunction gooseneck skeleton) for the first time in the history. China semi-trailer is shifting toward more environmentally friendly and intelligent development.

The other two classic models on display also made a splash and were considered by one customer from Europe as “the best Chinese trailer”. One is the 13.6m curtain-side semi-trailer with the high-gloss powder coating process and light-weight design, specially designed for for the Australian market. Featuring with the wind deflector, sliding roof, and fences on both sides, it allows the trailer to have much lower wind resistance and fuel consumption. A compound wooden floor with strong grip prevents them from slippling and makes vehicle maintenance easier. Seen from the outside, the side curtain looks nice and smooth. The other one is the 13.6m van transport semi trailer. It resembled the US in girders-free load-bearing structure, providing high-strength ultra-thin side panels and thin bamboo floors. This model is favored by industry customers because of its high strength, light weight and large capacity.

The second generation of Chinese semi trailers see no difference in size as those produced by Europe.  In Europe, those widely used special vehicles include side curtain trucks and central-axle van trucks. At present, CIMC has launched a global edition series trucks that have passed the rigious testing in North American market. By doing so, Chinese special vehicles makers are growing their confidence when competing with global makers and expand further the impacts of “China made”.