According to the latest statistics released by China Association of Automobile Manufacturers (CAAM), China sold 84,755 units heavy-duty trucks (including non-complete vehicles, semi-trailer towing vehicles) in November this year, down by 8.16% compared with that in the previous month and down by 7.72% year on year. For the first time this year, the sales of heavy-duty trucks witnessed a downward movement. 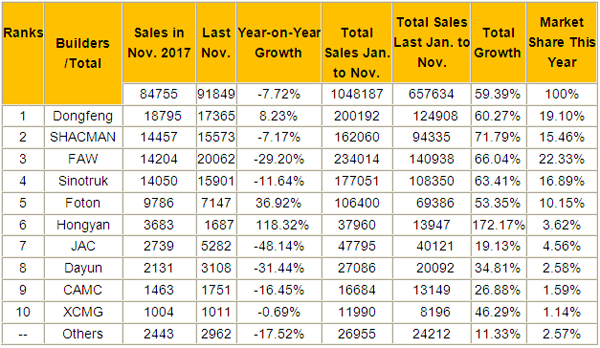 In November, the combined sales volume of the top ten players in the market totaled 82,312 units, accounting for 97.12% of the whole market.

Among the top ten players in the market, only the top four have their sales volume exceeding 10,000 units. BAIC Foton sold 9,786 units heavy-duty trucks in November.

In addition, among the top ten players, only SAIC Hongyan, Dongfeng and Foton experienced an upward movement in their sales. SAIC Hongyan registered the fastest growth in November with its growth rate reaching 118.32%. The rest seven players all saw their sales moving downward.

From January to November, China sold 1,048,187 units heavy-duty trucks (including non-complete vehicles and semi-trailer towing vehicles), up by 59.39% year on year. In the meantime, the top ten players in the market all witnessed varied positive growths in the first eleven months this year. SAIC Hongyan witnessed the fastest growth in its sales from January to November this year with its sales volume reaching 37,960 units and its growth rate standing at 172.17% year on year. (www.chinatrucks.com)