Heavy-Duty Truck Shows No Signs Of Stopping in China

In what is turning out to be a very difficult year for China’s motor vehicle industry, one bright spot is the country’s truck industry. After registering a stunning 52% increase in sales to an all-time high of 1.1 million units in 2017, sales of heavy-duty trucks increased another 15% in the first six months of 2018. While sales of heavy-duty trucks slowed in July and August, China’s truck makers will once again produce and sell more than one million heavy-duty trucks this year, making China the largest truck market in the world by a wide margin. 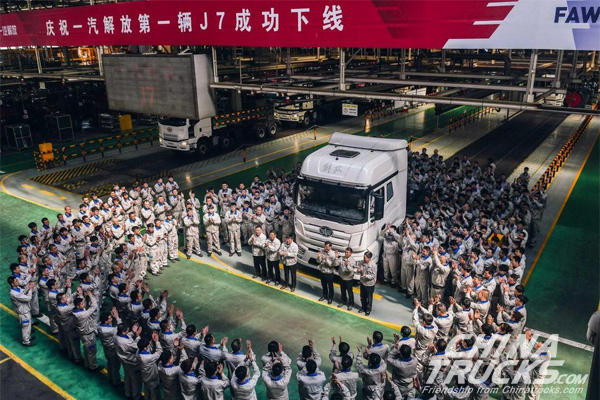 Of the 29 million vehicles produced and sold by China’s automakers in 2017, approximately 25 million were passenger cars and four million were trucks and buses. Trucks made up almost 90% of commercial vehicles last year, and within the truck category, 1.1 million heavy-duty trucks and 229,113 medium-duty trucks were sold in the country.

In China, heavy-duty trucks are defined as those with a Gross Vehicle Weight Rating (GVWR) of 12 tons (26,455 pounds) or more, and medium-duty trucks are defined as vehicles with a GVWR of between six and 12 tons (13,227 to 26,455 pounds), where GVWR is defined as the weight of the vehicle itself plus the weight of the passengers and cargo. In the United States and Europe, trucks are grouped into eight classes. Classes 1 through 4 have GVWRs below 16,000 pounds; Class 5 trucks have a GVWR of between 16,000 and 19,500 pounds; and Class 6, 7 and 8 trucks have GVWR’s ranging from 19,500 pounds to over 33,000 pounds. In other words, medium duty trucks in China correspond roughly to Class 4, 5, and 6 trucks, while heavy-duty trucks are approximately equivalent to Class 7 and 8 trucks in developed markets.

Apart from the large size of China’s commercial vehicle industry, the other noteworthy fact is that it remains an entirely local market, which includes the diesel engines that are the predominant source of power for trucks. Of the top 12 truck producers in China, all are local companies. The top five truck producers include First Auto Works (FAW), Dongfeng, Sinotruk, Shaanxi Auto, and BAIC Foton, companies that are household names in China, but are unknown elsewhere. Likewise, the five leading diesel engine makers — Weichai, Yuchai, Yunnei, Foton, and Quanchai — are prominent companies in China, but similarly unknown outside the country. Each of China’s leading diesel engine companies manufactured over 300,000 engines in 2017 and is ranked among the largest engine companies in the world.

The reason that China’s truck industry, including its diesel engine sector, is dominated by local, Chinese companies is quite simple. The freight industry in China, like many in the country, is fragmented, with thousands of relatively small companies competing for freight traffic. In this extremely competitive environment, there is a limit to what a trucker can charge for each ton of freight that is transported between, say, Shanghai and Beijing. That freight price then defines how much a trucker can pay to purchase, operate and maintain a truck, after taking into account the cost of fuel and the wages of the driver.

Market limited freight rates help explain why overloading is such a problem in China. In order to maximize the amount of freight carried — and their revenues — on each trip, truckers in China typically overload their trucks and stretch cargo capacity to the limit, and then some. It is also the reason why the international companies have been unable to penetrate China’s commercial vehicle industry in any meaningful way. The international truck and diesel engine makers, even if they manufacture their engines and trucks in China, simply cannot meet the price points that enable a trucker to cover their costs and make a small profit.

Sales of heavy-duty trucks in China have been a bit of a rollercoaster ride over the past 20 years. As China’s economy grew at double-digit rates, and the country invested heavily in its infrastructure in the first 10 years of this century, sales of heavy-duty trucks more than tripled, passing the one million mark in 2010. In the aftermath of the financial crisis, sales declined dramatically, bottoming out at 551,000 units in 2015. Over the last three years, however, sales have recovered, and the heavy-duty truck sector is once again a one-million unit market. During this entire period, sales of medium-duty trucks have remained steady, ranging between 200,000 and 300,000 units annually.

The general growth of China’s economy and continued high levels of infrastructure spending have been major reasons why sales of heavy-duty trucks have bounced back over the last three years. In addition, though, the rapid growth of China’s internet economy has also played a large role. On “Singles’ Day,” a shopping holiday that falls annually on November 11, in 2017, Alibaba sold $25.3 billion of products online in one day! The growth of China’s internet economy has, in turn, led to the development of the logistics business generally, and the need for more trucks and delivery vehicles specifically.

Tougher regulations and enforcement have also played a significant role. China’s Central Government is pushing through more restrictive emissions standards, and local governments are more strictly enforcing the emissions standards already on the books, as well as cracking down on overloading. These measures have led to a comprehensive upgrading of the trucks that move goods around the country.

As older trucks are replaced with newer, more fuel-efficient models, the rapid growth of China’s heavy-duty truck sector over the past two years will certainly slow. However, the size and growth of the country’s economy, in combination with a large land mass, will ensure that China remains the largest market in the world for commercial vehicles. (www.chinatrucks.com)