www.chinatrucks.com: Data from qianzhan.com shows that heavy truck segment has reported a continued rapid sales increase in April after 110,000 units were sold in March. In April, 2017, China’s heavy truck sales volume totaled 103,000 units, up by 50% over last year’s 689,000 units.

The rise in sales was mainly due to the stimulus and promotes during traditional busy season and the overlapping order and demands in the market. As the implementation of regulation on overload, road transportation shortage is already being felt, which stimulate increase in heavy trucks and brings all heavy truck enterprises benefit from this new situation.
Ranking of sales volume in April:
FAW Jiefang and Dongfeng remain top the list with a sales volume of 21,500 units and 21,000 units respectively, followed by SINOTRUK (000951) with sales volume of 17,500 units.
FAW Jiefang Takes a Narrow Lead in Heavy Truck Segment in April 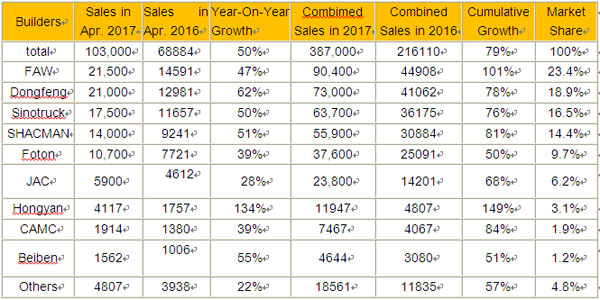