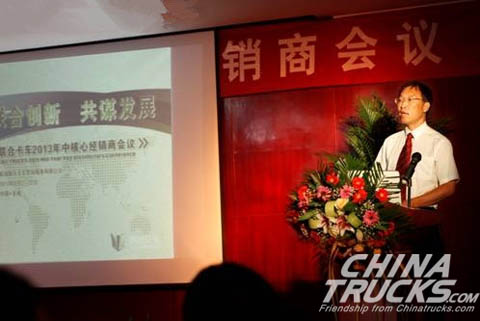 President Liu Bo announces the sales in the second half year: receive orders of more than 3,500 units with 2,780 units are delivered, up by 100% year on year. More than 1,300 units of LNG heavy trucks are sold. After that, Liu Bo introduces the marketing strategy for the second half year.

Since 2011, C&C has been focusing on LNG heavy trucks and invested a large amount of resources with an attempt to creating No.1 brand of Chinese LNG heavy truck market. Last year C&C Trucks officially enters this market and this year, it yields good results. With the launching of K12 and 13 LNG trucks, C&C finds its position in Chinese heavy truck market. Its LNG mixer truck ranks No.1 in terms of sales volume and LNG dumper climbs up to No.2. 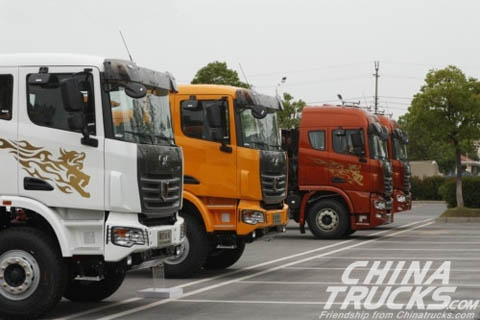 Vice general manager Zhang Zhiguo says that high-level LNG heavy truck will be two major products in the second half year even in coming years. The truck has four advantages: firstly, mastering core LNG engine resources with its YC6K13N gas engine the most mature product produced on the basis of world top 6K diesel engine mated to Yuchai ESI system combining Yuchai’s 14 years of development experience. The engine has the largest displacement in China with largest torque featured by low consumption of gas, strong power, high reliability and low noise, and it delivers output as much as 440Ps and has sound underlying control. Secondly, C&C takes LNG trucks as a core strategic product and ensures the production of LNG engines and complete trucks. Thirdly, its LNG trucks have sound performance, large torque under a low speed and low consumption of gas. Fourthly, C&C takes good advantage of its industrial chain by deepening cooperation of CIMC ENRIC, Sanctum and Hongtu.