www.chinatrucks.com: Recently, invested by Beijing Environmental Sanitation Engineering Group Sanitation Equipment Leting Co. Ltd, the sanitation vehicle production base starts construction in Leting Economic and Technological Development Zone in Hebei province. The production base will be used to produce electric road sweepers “Shining Blue” researched jointly by Beijing Sanitation Group and BYD. The project with an investment of 1.5 billion RMB will start trial production at the end of this year and will produce 15,000 sanitation vehicles per year in formal production phase. 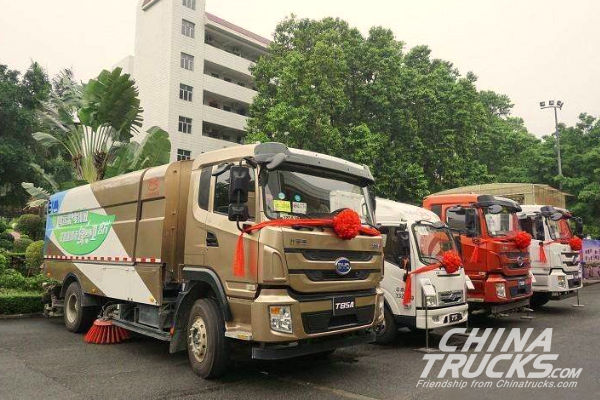 The project covers an area of 500mu, which includes a building area spanning over 184,000 square meters. They are designed for use in areas like sanitation vehicle’s parts production line, chassis production and assembly line, R&D, test center, office building and other facility buildings.

The project uses the most internationally leading German technology of soft welding production, robot-supported equipment, digital control plasma cutting technique and other high-end equipment and technologies. The base mainly produce new-type sanitation vehicles and equipment including road watering truck, fecal suction truck, garbage transfer truck, road sweeper, snow sweeper and special vehicles. After starting service, the base has the capacity to produce 15,000 units annually and the sanitation vehicles produced will be sold in Beijing, Jiangsu, Hainan and Guizhou provinces as well as Cuba and Brazil.

BYD electric sanitation vehicle, the one ever used in Tiananmen Square, is the global first zero-pollution, zero-emission, low-noise and low-radiation road sweeper. It was used to serve the military parade of Commemorating 70th anniversary of the victories of War of Chinese People's Resistance against Japan and the world Anti-Fascism war and has been put into market as a modeling new-energy sanitation product.

Responsible person in Laoting says after the construction, the project will be China’s largest production base for new-energy sanitation vehicle and equipment manufacturing and will achieve a business revenue of 5.44 billion RMB, 0.15 billion in profit and 0.18 billion in tax, and create 806 jobs.