In a move that’s sure to put a smile on Elon Musk’s face, Daimler has presented its own fully electric urban delivery truck in advance of Tesla’s truck event. The electric truck is capable of hauling up to 26 tons. 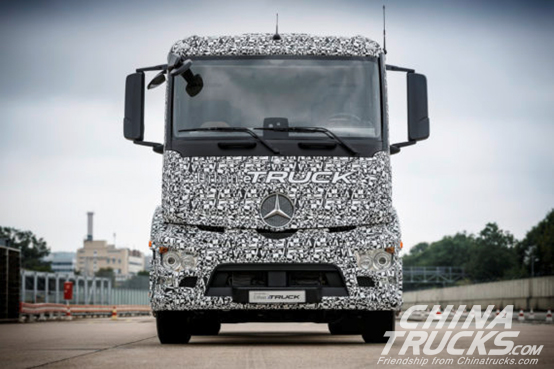 The new “Mercedes-Benz Urban eTruck” debuted yesterday in Stuttgart, Germany, in what is being pitched as a key step in the journey towards zer0-emission cities. Daimler Trucks shared that it will be bringing the vehicle to market in an extremely nebulous “beginning of the next decade.” So, while it was shown before the Tesla Semi, it doesn’t seem like it will be commercially available first.

The move is being pitched by mainstream media as a dig on Tesla or beating Tesla to the punch, but in all reality, this is what Tesla wanted. Tesla has successfully scared mainstream automotive manufacturers into producing electric vehicles. After all, its mission statement is: “to accelerate the advent of sustainable transport by bringing compelling mass market electric cars to market as soon as possible.” Notice there’s nothing in there about taking over the market, being number one in electric vehicle market share, or making more money than the other manufacturers. (Related: Tesla Won … Sort Of.)

Tesla is a missional company and I firmly believe that Elon and team see the announcement from Daimler today as a successful step in the right direction for the planet. Having said that, the fuzzy date by which Daimler will bring the truck to market is a bit of a joke. Daimler is not a startup. It is one of the oldest and most successful automotive companies in the world, with a correspondingly large R&D budget and team. If they had already been working on this for sometime, the dates would be more firm, would be sooner, and would be accompanied by production volume numbers.

Daimler does lean back on this legacy in the announcement of the new truck, stating that the “development of electric trucks and series production maturity are fixed parts of the strategy of Daimler Trucks to build on our technological leadership.” That’s an interesting statement coming from the company that tapped Tesla’s expertise in electric powertrains for its Mercedes-Benz B-Class Electric Drive (now the B250e). There is no mistaking that Daimler does indeed have significant mastery in heavy trucking, though, and the move into electric trucks is an exciting one.

Looking forward to the future, Daimler shared that it will be leaning heavily into electric drive technology for its trucking division, noting that “a considerable part of the future investments by the truck division in the fields of research and development flow in the further development of the full electric drive.” That’s exciting to see for everyone and even if they haven’t been working on an electric semi truck for a few years now, they are surely focused on building electric trucks moving forward.

The new Mercedes-Benz Electric Truck will be based on a “heavy-duty, three-axle short-radius Mercedes-Benz distribution truck.” Re-using an existing platform will help the project to move forward faster, presumably, but one has to wonder what compromises (if any) will be made to accommodate the re-use. The vehicle will use an electrically driven rear axle that has already been developed for the Mercedes-Benz Citaro hybrid bus, powered by batteries housed in a crash-proof enclosure inside the frame.

This is quite an exciting announcement from a major truck manufacturer that employs more than 78,000 workers by itself and brings in more than €33 billion in revenue for the company, per its 2017 fact sheet. Collectively, Daimler’s 6 truck brands sold more vehicles in 2016 than any other manufacturer, at 365,000 new vehicles registered. That’s nearly double the nearest competitor, Dongfeng, which only saw 201,000 new vehicles registered. (www.chinatrucks.com)