Martin Lundstedt, president and CEO of Volvo Group, said the Swedish automaker has unveiled a new self-driving truck prototype in Beijing, as part of its broad push to explore how automation can contribute to increased productivity, enhanced safety and lower environmental impact. 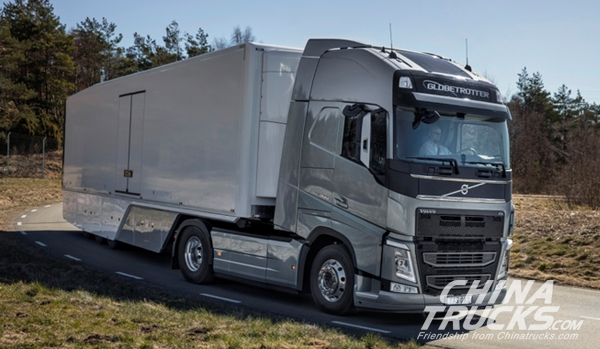 The truck which can drive autonomously from one hub to another is designed to be part of transportation solutions in semi-confined areas like harbors and dedicated lanes on highways. It was showcased for the first time to the public on Wednesday on the sidelines of the Volvo Group Innovation Summit in Beijing.

Lundstedt said the truck can navigate and operate autonomously by using lidar, or light detection and ranging, and GPS technology to continuously read its surroundings, navigating around fixed and movable obstacles.

"Though this technology may be years away from production, it will undoubtedly influence our future offering and has the potential to develop smart societies for the future," Lundstedt said.

According to him, the Gothenburg-based company is looking forward to testing the self-driving truck in China.

The company, which makes vehicles, engines and construction equipment, has been in China for 25 years. In 2015, it set up a joint venture with Dongfeng Motor Corp to expand presence in the heavy-duty and middle-duty truck segment.

Lundstedt said earlier that China's booming e-commerce business will offer great opportunities for the company's growth, as it is driving the entire transport system forward, setting a high demand for punctuality.

"Basically, we have three flows in a city-the mobility of people, and goods in and waste out. We're working to use the same solution and infrastructure to move the three flows forward," he said, adding the company is looking forward to working with China's city planning departments to offer such solutions.

Earlier this month, China said it will initiate a pilot program to relax foreign firms' ownership restrictions for businesses in its free trade zones that involve new energy and special use vehicles.

"We welcome such a development, which will not only be good for the industry but also for China's economy," Lundstedt said.

Volvo is pushing hard for autonomous vehicles. It is already testing a self-driving truck nearly a mile below the surface in an ore mine in Sweden.