Daimler has announced that is taking the latest generation of its Mercedes-Benz trucks, in the form of the Actros and Arocs, to more than 40 markets in the Middle East and Africa after years of continuing to sell older generation models. 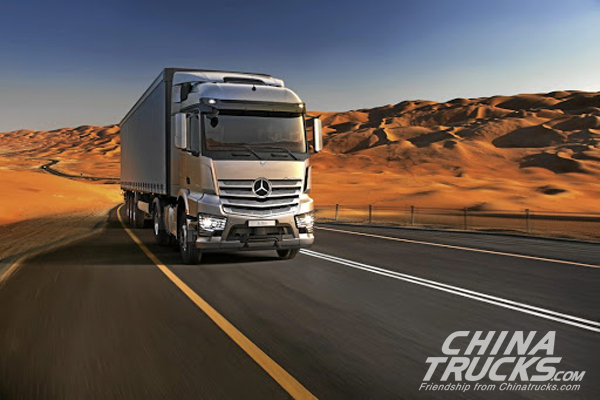 The decision is partly based on the forecast of economic growth of 2% to 5% in coming years in the Middle East, North Africa and sub-Saharan Africa.

"Our Mercedes-Benz Actros and Arocs have proved they can be relied on, as our customers do day in, day out in many markets around the world. A truck has to help a customer do the best job possible. And that is as true in the Middle East and Africa regions as anywhere. We are now taking our latest Actros and Arocs models to the markets there, with the aim of leveraging the momentum being experienced across these regions," says Stefan Buchner, head of Mercedes-Benz Trucks.

In SA, the company will start with the long-awaited launch of the new Actros in May, a model we first saw unveiled in Brussels in 2011.

The Actros is expected to be a major contributor to the brand’s sales figures in the region, which along with Fuso totalled more than 35,000 vehicles in 2017. Since the launch of the first Actros in 1996, the region has accounted for more than 10% of global sales for the model.

Sales of the new Actros and Arocs have already exceeded 300,000 in Europe, but conditions are different in the Middle East and Africa, one of the reasons given for the delay in their introduction. Fuel quality is another, particularly in Africa.

The company says the models to be introduced to the Middle East and Africa have been specifically configured. Depending on the specific market, the vehicles will be available with in-line six-cylinder engines in four variants — with output ranging from 240kW (326hp) to 460kW (625hp), as well as the Mercedes Powershift 3 automated transmission. Additional features include reinforced frames, robust planetary axles, optimised filter and cooling systems, plus the latest generation safety and assistance systems, such as Active Brake Assist (ABA4) or adaptive cruise control. When it comes to the cab, fleet operators can choose between as many as 22 variants offering more comfort, functionality and equipment.

Mercedes-Benz says it put the vehicles through the most intensive programme of testing used by the company for trucks.

From a base in Abu Dhabi in the United Arab Emirates (UAE), experts from the Mercedes-Benz Truck Testing Centre in Stuttgart subjected test vehicles from the two model series to 6-million kilometres of testing across the UAE, under the toughest conditions imaginable — both on and off-road, in humid conditions and at temperatures of up to 50°C, while carrying extremely heavy loads.

Further extensive testing was undertaken in other regions, including SA. (www.chinatrucks.com)