GERMANY(chinatrucks): In terms of payload, distance and routes, heavy-duty long-haul transport is the most demanding segment in road freight transport. At the same time, there is great potential here to reduce CO2 emissions. Following the market launch of the eActros for heavy-duty distribution transport in 2021, Mercedes-Benz Trucks is now igniting the next stage for battery-powered heavy-duty long-haul transport. The company is presenting the eActros LongHaul, announced in 2020, for the first time at the IAA Transportation 2022 in Hanover. With clear contours and an LED light strip in the front area, the vehicle provides a preview of the design language of the series-production vehicle. The first prototypes have already undergone intensive tests and will next be tested on public roads this year. In the coming year, near-series prototypes will be sent to various customers for testing. 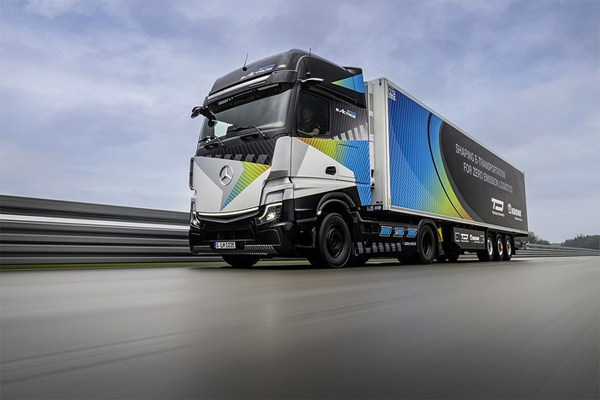 Karin Rådström, CEO Mercedes-Benz Trucks: “We are continuously expanding our portfolio of battery-electric trucks. Our focus is on offering clear advantages to our customers. Therefore, our electric trucks are specifically designed for e-mobility, giving them better drivability, energy efficiency and durability.”

Advantages of the Mercedes-Benz eActros LongHaul

Mercedes-Benz Trucks has also announced additional information on the eActros LongHaul series. Three battery packs provide an installed total capacity of over 600 kWh. Two electric motors, as part of a new e-axle, generate a continuous output of 400 kW and a peak output of over 600 kW.

In addition to the tractor unit, Mercedes-Benz Trucks will also produce rigid variants of the eActros LongHaul right at market launch. This will offer customers numerous other possible use cases in fully electric transport. Development engineers at Mercedes-Benz Trucks are designing the eActros LongHaul so that the vehicle and its components meet the same durability requirements as a comparable conventional heavy long-distance Actros. That means 1.2 million kilometers on the road over a period of ten years.

The eActros LongHaul will be the first all-electric series-production vehicle from Mercedes-Benz Trucks to be manufactured from start to finish on the existing assembly line at the Wörth truck plant. This includes the installation of all electrical components and putting the vehicle into operation at the end of the line. It enables high-production capacity and the completely parallel production of both conventional and fully electric trucks on the same line. With the eActros 300/400 and the eEconic, on the other hand, electrification has so far taken place in a separate process at the Future Truck Center in Wörth. 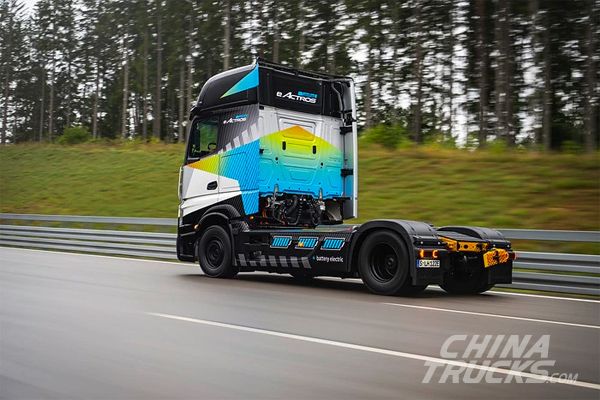 The batteries used in the eActros LongHaul employ lithium-iron phosphate cell technology (LFP). These are characterized, above all, by a long service life and more usable energy. The batteries of the production eActros LongHaul can be charged from 20 to 80 percent in well under 30 minutes at a charging station with an output of about one megawatt. The core of the Mercedes-Benz Trucks concept for battery-electric long-distance transport is to offer customers a holistic solution consisting of vehicle technology, consulting, charging infrastructure and services. The eActros LongHaul is planned to be the right choice for customers in terms of profitability, sustainability and reliability. First prototypes are already undergoing intensive testing and the eActros LongHaul will be tested on public roads later this year. In the coming year, near-production prototypes will go to customers for real-world use testing.

eTrailer for even higher ranges

Electrified trailers can significantly increase the range of electric trucks. For example, the tech company Trailer Dynamics developed the "eTrailer" together with the trailer manufacturer Krone. The core is an e-axle built into the trailer, including batteries, which support the towing vehicle with additional power. Depending on the battery capacity of the eTrailer, ranges of more than 800 kilometers are possible with the series-production version of the eActros LongHaul on one battery charge. 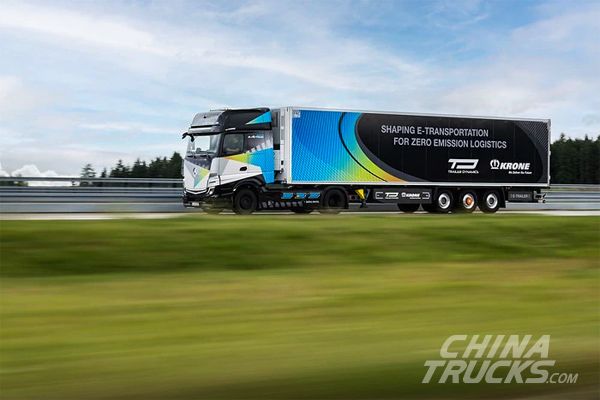 Commitment with partners for charging infrastructure

With regard to public charging for long-haul transport, Daimler Truck, TRATON GROUP and Volvo Group founded a joint venture in July. The joint venture plans to install and operate high-performance charge points for battery-powered heavy-duty trucks and coaches in Europe. The charging network initiated by the three parties will be open and accessible to all heavy commercial vehicles in Europe, regardless of brand. Mercedes-Benz Trucks is working with Siemens Smart Infrastructure and ENGIE on depot charging.

In addition, Daimler Truck participates in the “high-performance charging in long-distance truck transport” (HoLa) project. The goal of this project, under the patronage of the VDA, is the planning, construction and operation of a selected high-performance charging infrastructure for battery-electric long-haul trucking. Two high-performance Megawatt Charging System (MCS) charging points will be set up at four locations in Germany and tested in real-world use. Various other consortium partners from industry and research are involved in the project.

Since e-mobility is more than just a new technology, Mercedes-Benz Trucks will integrate the eActros LongHaul, like its currently available electric trucks, into a holistic ecosystem that includes consulting services for efficient vehicle use and optimization of Total Cost of Ownership (TCO). For example, existing routes can be used to determine the most realistic and meaningful application profile of electric trucks for the respective customer in order to determine routes that can be driven with electric trucks. In addition to electrification of the depot, all questions relating to planning, application modalities and implementation relating to the required charging infrastructure, as well as network connection, are also part of the so-called eConsulting, depending on the customer’s requirements.