Statistics show that FAWDE's total export volume increased by 55% year-on-year in the first five months of this year. Among them, the sales volume of Aowei products rose by 319% year-on-year, hitting a new record high. 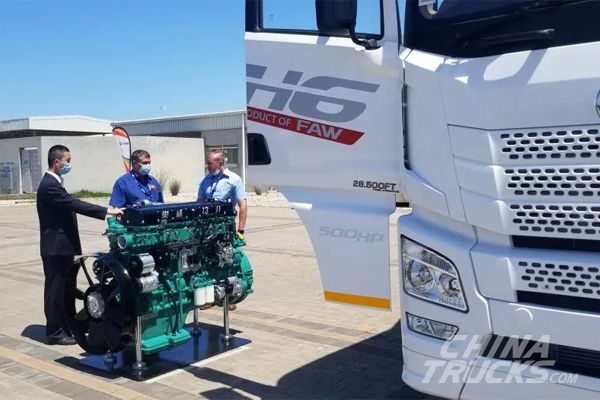 Since J6’s official entry into the South African market in 2011, it has become a money master for customers. From January to May, the number of orders for J6 increased by 304% year on year.

Vietnam office held some promotion activities in Hanoi and Haiphong to enhance its local popularity. By the end of May, 51% of the annual sales target had been achieved.

In addition, the Vietnam office also worked closely with Jiefang to broaden the product line according to the market demand in Vietnam. At the present, J6P with 370hp Aowei CA6DL3 and JH6 with 460hp Aowei CA6DM2 have been successfully introduced into Vietnam market.

During the visit to customers, the marketing department signed an order for 200 units of Jiefang J6 products in May, all of which are powered by Aowei engines.

Its sales volume in Monglia has surged from 0 to 600 units since its entry in 2021. Mongolia has thus become one of the important strategic markets.

In Brazil, FAWDE provides you with technical support and also conduct some professional training on engine in theory and the use of diagnostic instruments to help defect faults and improve the reputation of FAWDE among local users.

Since May, they have received orders for 400 loader excavators. The number of orders is expected to exceed 1,500 units this year.

In May, overseas personnel has conducted targeted training for three companies in the Philippines. FAWDE is also recognized gradually by Filipino customers due to its caring service and excellent quality. From January to May, FAWDE's sales in the Philippines increased by 150% year on year.