www.chinatrucks.com : The new engine plant of Ford has officially came into operation in Chongqing. Management from Ford and Chana attended the ceremony, including CEO of Ford and CEO of Chana.

The new plant occupies a total area of 400,000 square meters with a total structure area of 165,000 square meters. The expected manufacturing capacity is 400,000 ubits annually. This is a historical expansion for Ford in China.

As Ford’s biggest engine plant in the Asia Pacific region, the new plant employs world-leading technologies. By using those technologies, the plant will reduce energy consumption by a big amount. Also, workers could have a better working environment. 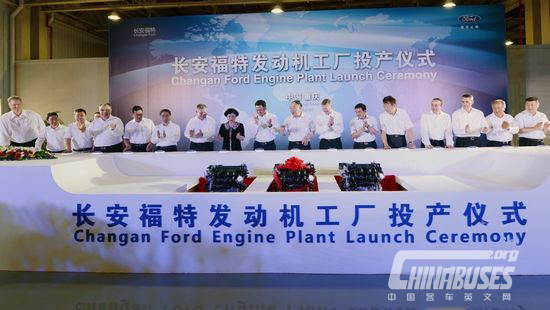 CEO of Chana Ford said that the new plant is of great importance for the company, as it is a part of the company’s strategic plan. The plant will bring in the best energy-saving engines. And, we are proud the new plant could make big contribution to the city of Chongqing, creating a lot of jobs.

Two types of engines is expected to be manufactured in the new plant, with one being 1.5L and the other one being 1.0L. The former one was granted the world’s best engine for two consecutive years. Those engines will be supporting the strategic plan of Ford.

In recent years, by constantly introducing into China new car models, the company is enjoying increase in sales. Sales number in the first five months was up 71%. After the new engine plant is put into operation, Ford will be able to sell even more cars. The company is also dedicated to providing best cars for Chinese customers.

Ford is gradually rearranging its plant network in China. By doing so, the company will best integrate its resources in China, and thus help the company expand in the country. By far, Chongqing has become Ford’s biggest manufacturing base outside of Michigan, USA.