Location:Chinatrucks > news > truck news > Scania S 500 to be Shown Off in Australia at 2017 Brisbane Truck Show

www.chinatrucks.com: Even though the commercial launch of Scania’s S 500 series in Australia is "way off", the company is bringing an example of its New Truck Generation range for display at the 2017 Brisbane Truck Show.

The Scania S 500 prime mover was launched in Paris last year and has won two accolades in Europe so far – the International Truck of the Year 2017, and 1,000-point European heavy vehicle comparison test. 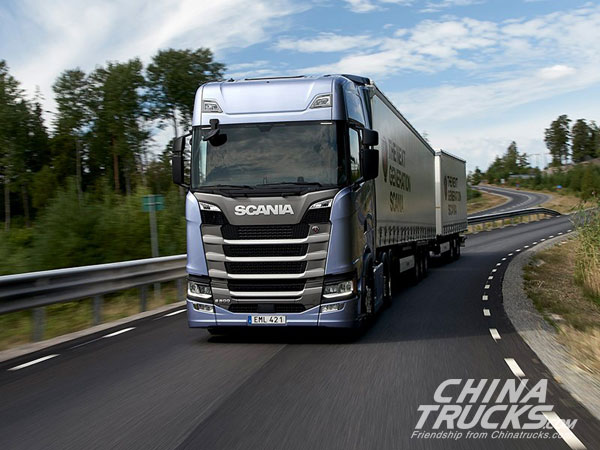 The UK-specification truck will be brought out only for the Truck Show and will return to Europe immediately after the show.
Scania says it will conduct local market evaluation before launching the the New Truck Generation range in Australia.
Scania Australia MD Roger McCarthy says the company decided to "fast-track the delivery of an example of the S 500 to Australia, even though the commercial launch of the New Truck Generation Scania range is still some considerable way off".
"The truck on display is representative of a specification that could be offered to the Australian market once the New Truck Generation Scania is launched here," he says.
The Scania S 500 on display will be shown in 6x2/2 configuration with a pusher axle (with single wheels) and rear drive axle with dual wheels.
It has a 13.0-litre SCR Euro 6-compliant six-cylinder in-line engine, producing 500 hp (373 kW) at 1900 rpm, and 2550 Nm (1882 lb/ft) of torque between 1000 and 1300 rpm.
The 500 hp engine drives through the Scania GRS905R direct drive gearbox, controlled by Scania Opticruise automation, which provides three performance modes (economy, standard and power).
The Opticruise gear-changing is up to 45 per cent quicker than before owing to the adoption of a new layshaft brake.
It is fitted with the latest high output R 4100D Scania Retarder, plus an exhaust brake, offering seamless deceleration while preserving the service brakes.
The rear driven axle uses a 2.59:1 final drive ratio, reflecting the lower European speed limit for heavy goods vehicles of 85 km/h, and is equipped with a differential lock.
The Highline model on display also offers additional headroom inside thanks to the cab’s completely flat floor.
Scania S 500 also features ABS/EBS safety systems with advanced emergency braking, electronic stability control, adaptive cruise control, Scania lane departure warning, and the "world-first" driver’s side window curtain airbag.
Other features include: climate control, electric roof hatch, a 1000mm wide expandable lower bunk, a 700mm upper bunk, Scania Communicator, LED head and tail lamps, LED daytime running lamps, and LED fog lamps.
The Brisbane Truck Show will also feature a selection of the current generation of Scania prime movers including the current flagship, the R 730 V8, a G 480 prime mover and a P 310 8x2 rigid.
"We will also be demonstrating the advantages of Scania Maintenance with Flexible Plans, which combined with Scania Optimise, provides fleets and owners with a deep and user-friendly insights into the most cost-effective and efficient way to maximise the profitability of their Scania assets," McCarthy says.
"The Scania stand at the Brisbane Truck Show will provide all truck operators with the perfect opportunity to gain a clear understanding of efficient, sustainable, safe and driver-friendly trucking."
Related China Trucks News
Do You Want Any Help?