A Decade of R&D Endeavors by YUCHAI Bears Fruitful Results

www.chinatrucks.com:On August 12 that marked the 10th anniversary of the founding of Yuchai Engineering Research Institute, 2017 R&D Achievements Exhibition by YUCHAI GROUP kicked off at testing center of the Engineering Research Institute. This exhibition shows the R&D achievements made by Yuchai over the past ten years and latest ones made in 2017. During the exhibition, Yuchai took the lead in launching two diesel engines qualified for non-road Stage IV emission regulation, an indicator that Yuchai has successfully developed the whole series of Euro VI and T4 engines and continued to occupy its first place of its industry in technology. 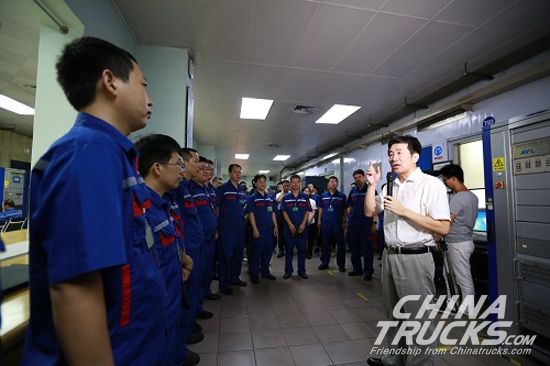 According to requirements by the Ministry of Environmental Protection of the People’s Republic of China, China is expected to implement Non-road Stage IV Emission Regulation (T4) by January 1st, 2019 and Stage VI Emission Regulation for Motor Vehicles (Euro VI) motor vehicles Stage VI emission regulation by January 1st, 2020. As an enterprise with strongest R&D capability in diesel engines across the nation, at early 2016 Yuchai has done pioneering work in R&D of Euro VI and T4 and taken first place in market R&D.

Product planning for Euro VI engines includes light-, medium-, and heavy-platform and six series products with the power ranging from 100 horsepower to 700 horsepower. Among them, over 10 products have passed the performance test for prototype engine and will enter the experiment phase for matching the whole bus including YCK13, YCK08, YCS04, YCY24, YCK11, YCK5, YCY30, YCS06, YCK13N, YCS04N and YC6JAN. They have integrated the most advanced engine technology of its international kind with same engine displacement, one advantage shared by all of them. And their product performance has overtaken products of their kind across the globe by virtue of strong power, low fuel consumption, competitive emission, low noise, light weight, small size, high reliability and long service life.

The first T4 product of this time is YCA05-T4. Since 2017 when the non-road diesel engine of YCA05 come out, by now its sales volume has approached 450, 000 sets accumulatively and it have developed into the competitive products in non-road engines of Yuchai. The engine has been extensively applied in agricultural machinery like wheat harvester, corn harvester and tractor, and engineering machinery like forklift, air compressor, drilling machine and loader. By virtue of its good reputation among agricultural machinery market, the diesel engine of YCA05 has become a star product of agricultural machinery industry. It worths mentioning that the maximum power of YCA05-T4 products have been uplifted to 175 horsepower from previous 90 horsepower.

The second T4 product of this time is YCDK04-T4. This engine is a non-road diesel engine with high quality and light weight jointly designed and developed by YUCHAI GROUP and Ricardo plc of British in 2015. T3 products of YCDK04 have been applied in market segments like paddy harvester and medium-sized tractor, and have completed matching with market segments like forklift, loader and air compressor. Its technological strength of high quality, light weight and compact design has made it the primary choice in engines for segment markets like paddy harvester, paddy tractor and forklift. Diesel engines of YCDK04-T4 will develop into a growth point in segment markets for non-road engines of Yuchai.

The two new products of YCA05-T4 and YCDK04-T4 with high-quality non-road common rail system and highly integrated smart control system possess good fuel compatibility, high reliability, more convenient measurement, whole machine vibration, lower noise and better suitability between segment markets; Great progress has been made in their largest torque with better fuel economy and a doubling maintenance cycle with 500 hours. In comparison with T3 products, the particulate matters (pm) of YCA05-T4 and YCDK04-T4 have been cut by 90% with smaller volume and stronger power. Launch of the two T4 products will exert significant influence on Yuchai’s new round of upgraded emission system for its non-road products.

R&D achievements of this exhibition cover a wide range of ones made by Yuchai over the past ten years in R&D quality management, benchmarking system construction, pilot technology, components design, electronic control technology, performance development and R&D of CAE.

Founded on July 20th, 2007, Yuchai Engineering Research Institute now with a staff of over 670 has developed into the R&D unit for Yuchai. In pursuit of independent innovation and with an aim of surpassing international advanced players, the institute has launched nationally first set diesel engine meeting Euro V and Euro VI emissions standards and played a pioneering role in the green revolution of this industry. Since 2010, with its support, YUCHAI GROUP has won 27 national, provincial and city-level prizes for progress in science and technology. During this period, it has won the national second prize for progress in science and technology for three times over four years. Such a remarkable accomplishment has created good economic and social benefits and it has brought into full play leading role of technical innovation of internal combustion engine industry. And Yuchai Engineering Research Institute is engaged in its goal that it will be ranked “among the first few across the nation and among the first five across the globe” and develop into an internationally advanced institute by 2020.

Since 2017, YUCHAI GROUP has seized opportunities presented by upgrading of engine emission system, the Belt and Road Initiative construction and the second startup of Guangxi’s machinery industry. And it has also made continuous, further and intensified efforts in reform, innovation, quality and efficiency to deliver impressive results in its work. In the first half of this year, its sales surpassed RMB18.2 billion with a year-on-year increase of 19.42%; its sales volume of engine approached 300, 000 sets with a year-on-year increase of 24.34%. These impressive figures have secured its first place among the industry. YUCHAI GROUP has registered a good trend towards steady, sustained and healthy development.