Location:Chinatrucks > news > parts news > Yuchai Keeps Its Sales Revenue Increasing 20% YoY in the First Half of 2017

www.chinatrucks.com:Yuchai prepared for its semiannual and annual business tests through elaborate planning and systematic organization, and gained remarkable grades in the test of the first half of 2017: The group’s sales revenue exceeded RMB 18 billion, a year-on-year growth of nearly 20%. Yuchai Group kept steady progress and was expected to make brilliant achievements this year. 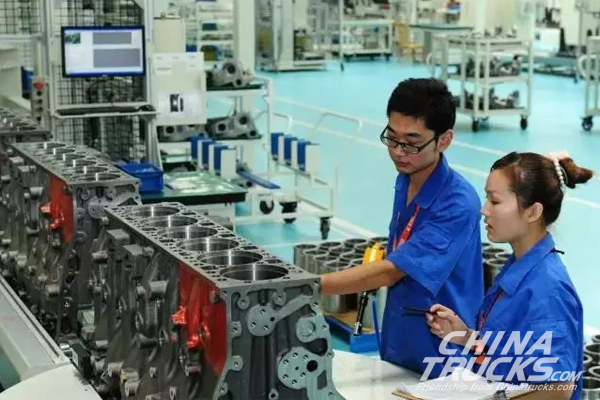 In recent years, the engine industry continually declined. However, driven by the “Belt and Road” Initiative and some other favorable national policies, regarding the development trend from the second half of last year to the first half of this year, enterprise revenue, market confidence and economic vitality continued to improve and revealed a positive trend.

The subsidiaries gained outstanding and excellent performance. The Y&C Engine revealed continuous and explosive growth in the first half of this year; the sales of engines increased more than 177% year on year; and on the afternoon of July 15, the 10,000th engine in 2017 was successfully produced. The sales revenue of Y&C Engine increased 28.30% on an annual basis in the first half of this year, and the sales of engines increased 8.82% year on year. The sales revenue of Guangxi Yuchai Parts Manufacturing Co., Ltd. increased 26.09% on an annual basis from January to June, laying the foundation for the full completion of the annual business objectives and tasks.

In the first half of this year, under the guidance of the concept emphasizing on “Benefit, Safety and Health”, Yuchai Group’s subsidiaries dedicating to other sectors achieved good management benefits, effectively supported the development of the group’s industries, “consolidated the stable setup, and strengthened the good situation.”

In the second half of the year, Yuchai Group will continue to make efforts to consolidate the achievements of the first half of the year, while further pay close attention to innovation-driven approach, continue to deepen the system reconstruction, enhance product competitiveness and market share, improve quality and efficiency, and maintain the steady development of the enterprise.