Location:Chinatrucks > news > truck news > The Launch of New Quon is a Big Deal for UD Trucks in Australia

Quietly flagged at the time of the Brisbane Truck Show earlier this year, the new trucks bring trans-national group technology with productivity efficiency improvements from across the Volvo Group.

Last week a range of Quon trucks were made by available to Australia's road transport media for the first drive in this country. 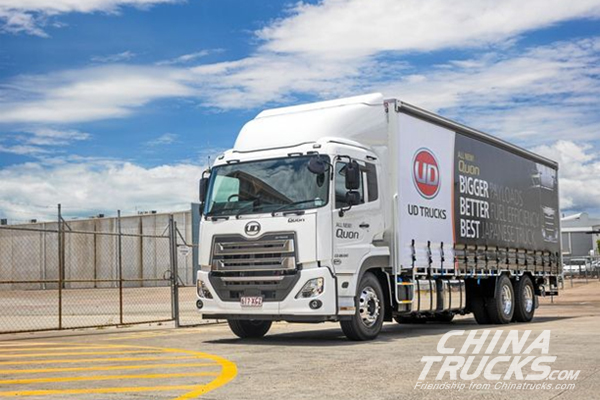 The diverse range, from a B-double to 6x2 rigids, demonstrates the flexibility of the line-up.

These sentiments were echoed in the presentation that preceded the Brisbane test drive.

The trucks and trailers were parked up and ready to roll at the Volvo Group dealership in the Brisbane riverside industrial precinct of Pinkenba.

The flagship of the group was the 460hp Quon 6x4 prime mover hooked up to a B-double set, grossing 60 tonne.

Two tipper variants, one a tipper and dog combo with the Quon 460hp big banger and the other a tipper and equipment trailer with the smaller 390hp rating.

The Quon was first released back in 2004 and Acting VP of Sales for UD Trucks in Australia Mark Strambli said while group technology has been quietly introduced since 2013, the truck has not had a major upgrade since its launch 13 years ago.

"The Quon was the first truck offered on the market with SCR in Australia from a Japanese manufacturer,” Mr Strambli tells Big Rigs.

The 2017 upgrade brings the advantage of the traditional longevity and strength of a Japanese truck with the global component approach of the international Volvo Group, and if the predicted mix is successful, this dual ancestry that could work well for UD Trucks both in Asia and in other markets such as Australia.

Transmissions, differentials, engines and electrical architecture are all group technology shared, with some interpretation, with other Volvo Group brands.

"We call this Tier Two and that's the latest technology available in the marketplace,” Mr Strambli said.

"This vehicle has a suite of safety features that has never been seen before in Japanese trucks,” Mr Strambli said.

I asked the UD boss if he thought these advances gave the Quon a marketplace advantage over other Japanese manufacturers.

"We think it does. We think other Japanese manufacturers are probably 18 months away, maybe even longer, in being able to match the technology,” he said.

The engine combines a unit injector with a common rail system that builds torque at low revs and has flat torque curves in the 390 and 420 variants.

This engine exceeds, according to the manufacturer, Euro 6 emission standards.

The Escot-V1 12-speed transmission system, not surprisingly, has performance and handling technique similar to the close rellies of I-shift and M-drive.

The shift lever is console mounted and a straight R-N-D pull through with an M option for manual overdrive.

The transmissions have two options, one an overdrive ratio in 12th, the other a direct top slot.

"Return to base B-double work, running Brisbane to Bundaberg or Sydney to Newcastle, that type of run where the truck returns to base each night,” Mr Strambli said.

"It also fits into the local distribution, metropolitan B-double work and has application in the PBS space with different combinations.”

Mr Strambli does not consider the Quon 460hp units will infringe on sales of other VGA product.

He said a main difference is that Volvo trucks are built in Australia and have the option of a high degree of customisation while speccing choice is more limited in the Japanese truck that is fully imported after being built in Japan.

The Quon cab is suited more to day work while Volvo and Mack offer a full sleeper cab.

He an analogy: "If you buy a suit that is tailor-made you pay $2000. Off-the-shelf you pay $800. That is probably is an exaggeration in price differential, but basically you have the choice of tailor-made or a standard specification.”

The new Australian Quon line-up is now being built in Japan, order books are looking healthy we're told, and first deliveries off ships will be in 2018. (www.chinatrucks.com)