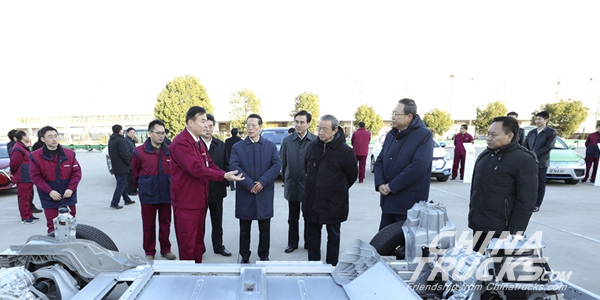 Entering into JAC passenger car second plant, S7,S2,IEV pure-electric vehicles were properly arranged in the production line, which is a flexible production line, realizing mixed-line production of conventional fuel vehicle and new energy vehicle through the modular assembly with one unit of new vehicle off the line every 90 seconds.

Zhang, listened to Mr. An's introduction of JAC business operation carefully and attentively observed the assembling process of this flexible production line. Then, he gave -recognition to this automatic, intelligent, scientific and technological production line.

'Is this a lithium battery?'inquired by Zhang when he was standing in front of JAC new energy vehicle battery exhibits and carefully examining the battery internal structure.

'This is a ternary lithium battery.' Mr. An introduced, 'the key technologies of battery pack’s electric heating management and essential safety management are independently developed by JAC. In recent years, JAC R&D’s liquid cooled battery system can ensure that the battery pack works at a normal temperature above 45 degrees or minus30 degrees. 'It can ensure the safety of battery as well as bring the battery performance into full play.'

Zhang has always paid close attention to the production capacity cooperation project between China and Kazakhstan. In November, 2016, the automobile plant project of JAC in Kustanai, Kazakhstan has officially kicked off.

'How is JAC plant in Kazakhstan?'

'The plant has been put into the production and some products have been exported to surrounding countries. And the radiation function has preliminarily appeared.'

Zhang is satisfied with JAC seizing the 'One belt, One road' strategic opportunity, innovating the cooperation model and speeding up 'Going out' strategy.

The latest JAC new energy vehicles and high-end products were displayedin the square. Zhang walked forward to examine them and take a test drive. An made a detailed introduction of those vehicles’ technical characteristics and market performance one by one.