Japanese carmaker Isuzu Motors Ltd holds a positive outlook for 2018 shipments from its Thai manufacturing base, as it is seeks new market destinations and plans to export its big trucks for the first time this year. 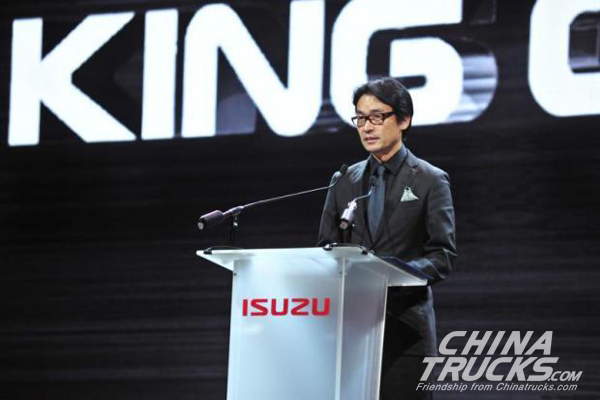 Toshiaki Maekawa, president of Tri Petch Isuzu Sales, the local distributor of Isuzu trucks, said the Tokyo-based parent firm plans to increase export volume to existing markets such as Australia (where Isuzu has a 10% market share) and Britain, while expanding into new markets such as Iran and Argentina.

The locally made Isuzu King of Trucks model, which made its world debut last April in Thailand, is now ready to start CKD shipments to three pilot countries: Indonesia, the Philippines and Vietnam. Isuzu does not have a plan yet for its CBU big trucks.

In the near future, the CKD export destinations for our big trucks will be other Asean countries like Malaysia," Mr Maekawa said.

Mr Maekawa said that through a collaboration with Mazda, Isuzu operations in Thailand will take responsibility for the next-generation of Mazda pickups. Isuzu's production lines will thus be fully utilised, but capacity allocation is still being studied by both parties.

Mr Maekawa said Isuzu will grow in line with the overall local market, expected to perform well with 900,000 cars sold in 2018, a 3.4% improvement.

"The Thai economy is on the recovery path with many positive factors, driven by the government's substantial investment in infrastructure projects and positive signs in the country's tourism industry, which is a key economic engine," Mr Maekawa said.

But he said some negative factors could weigh on economic growth, including low farm-product prices and political uncertainty in several countries that could affect the global economy.