www.chinatrucks.com: Isuzu Motors Ltd. is preparing to double its heavy-duty truck production capacity in Thailand this year in hopes of increasing exports to Southeast Asian markets.

The company recently invested further in its heavy truck plant in Thailand’s central province of Chachoengsao to double its annual production output of 25,000 to 26,000 vehicles. Thailand-produced trucks mostly cater to the domestic market at present, according to Toshiaki Maekawa, president of Isuzu’s local distributor, Tri Petch Isuzu Sales Co. 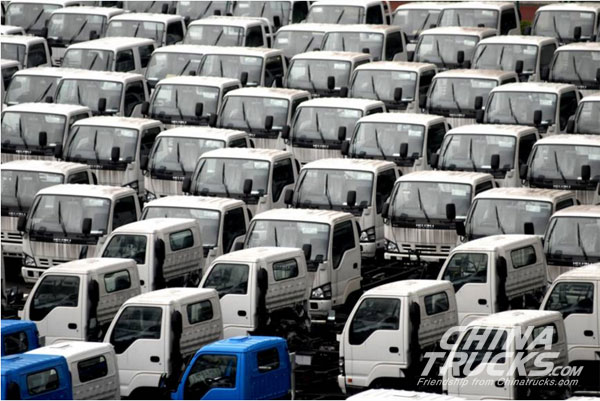 The carmaker expects to start exporting heavy trucks 2 tons or larger in loaded weight, both built-up and knocked-down, to meet huge demand in Southeast Asian countries in the near future.
Maekawa said the region’s potential markets for heavy trucks include Indonesia, which is 10 times as big as Thailand, Vietnam and the Philippines.
Last Tuesday, Isuzu unveiled a range of six new heavy models dubbed the “King of Trucks” for the first time in Thailand with prices from 1.8 million to 3.4 million baht (¥5.9 million to ¥11.1 million ). The new models are locally made and are expected to be exported to other regional markets.
Isuzu earmarked Thailand as a strategic hub for heavy trucks in Southeast Asia in 2014 when it decided to set up a research and development center in the country working on the “King of Trucks” series.
The company’s Japanese R&D center for heavy trucks is working for the U.S., European and Australian markets.
Isuzu forecast its heavy truck sales in Thailand will hit 13,000 vehicles this year, up from last year’s 12,000, maintaining its 49 percent market share and its sector-leading position.
The company predicted sales of trucks weighing over 2 tons fully loaded in Thailand this year will reach 26,000 to 27,000 vehicles, similar to last year’s performance.
The heavy truck market is thriving mainly on government investment in infrastructure development projects, better pricing of consumer goods and tax breaks for local entrepreneurs who spend on commercial vehicles.
Back at home, auto sales are buoyed by minivehicles. Industry data showed Monday that auto sales in Japan in April grew 9.2 percent from a year earlier to 354,750 units, helped largely by stronger sales of minivehicles, or cars with engines no larger than 660 cc, as well as other types of new models.
Sales of minivehicles in the reporting month grew 16.5 percent from a year earlier to 130,530 units, up for the first time in four months, according to the Japan Light Motor Vehicle and Motorcycle Association.
By brand, Nissan’s minicar sales more than doubled and those of Mitsubishi Motors jumped 88.5 percent, rebounding from sluggish demand following a fuel economy data manipulation scandal last year. The scandal at Mitsubishi Motors prompted a temporary halt in the production and sale of its two minicar models as well as two supplied to Nissan. Toyota’s minicar sales increased 28.5 percent while those of Honda dropped 1.1 percent.
Sales of new models excluding minivehicles was another contributing factor. Vehicle sales rose 5.4 percent from a year earlier to 224,220 units, the Japan Automobile Dealers Association said. Among them, sales of passenger cars increased 6.1 percent to 195,874 units.
By brand, Toyota Motor Corp.’s sales rose 1.4 percent, those of Nissan Motor Co. climbed 21.7 percent and Honda Motor Co. saw a rise of 14.3 percent. Mitsubishi Motors Corp.’s sales fell 3.9 percent.
Related China Trucks News
Do You Want Any Help?