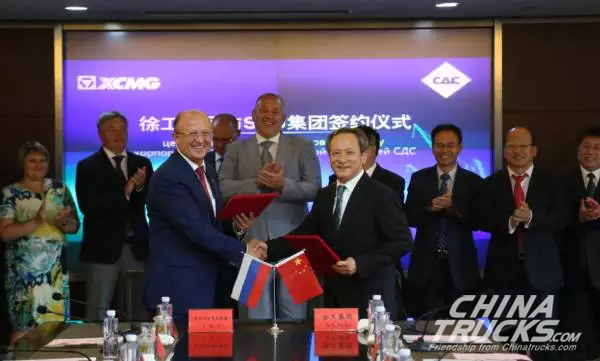 Before the signing ceremony, leaders and officials from SBU paid a special visit to the production bases of XCMG’s cranes, mining machinery and Customer Center. Deeply impressed by the high level of intelligence and high efficiency of its production, they spoke highly of XCMG’s achievements.

As the largest mining group in Kuzbass District of Russia, SBU Group was officially set up on August 12, 2004. In just over a decade, it has grown into a large company with 45,000 employees involved in a number of business fields, such as vehicle manufacturing, coal mining and processing, construction, agriculture, aviation, travel, insurance, food processing, pharmaceutical engineering and chemical engineering.

XCMG has been expanding its business in the international market for over three decades. For many years, it has remained the No.1 player in the machinery exporting market in China. So far, it has set up 40-plus branches, 300-plus distributors and 500-plus contracted service providers across the globe. Moreover, XCMG’s products have successfully made their way to 177 countries and regions across the world. Since entering Russian market in 2000, XCMG has already set up its branches, representative offices, spare parts warehouses across Russia, building a sound market network and gaining wide popularity. So far, XCMG has sold nearly 20,000 sets products in Russia.