www.chinatrucks.com: Hyundai will be launching a pickup in the U.S. to help make up for double-digit losses as consumers continue to lose interest in sedans.

The automaker will be offering U.S. buyers a truck that’s similar to its Santa Cruz concept which was unveiled in 2015. No date has been given yet for the launch. 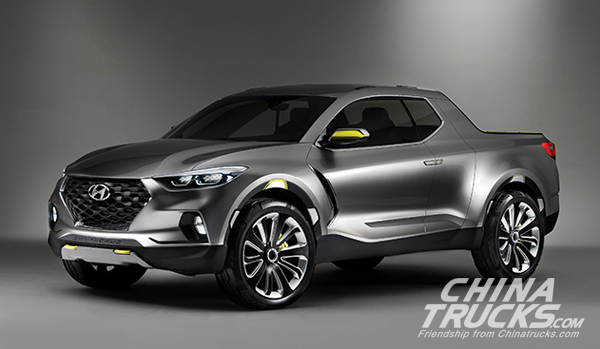 The Santa Cruz concept pickup won Concept Truck of the Year at the 14th annual North American Concept Vehicle of the Year (NACVOTY) Awards in July 2015 at the Concours d’Elegance of America at St. John’s.

A Hyundai executive told Reuters that the company will also be launching a crossover SUV called the Kona in the U.S. later this year.

Hyundai’s U.S. dealers have been pressuring the company to green light a pickup and more SUVs as sales for its once-popular Sonata sedan continue falling, reaching a 30 percent drop over the first seven months of 2017. Overall, Hyundai’s U.S. sales fell roughly 11 percent from January through July 31. However, sales for Hyundai’s crossover SUVs increased 11 percent over that same time.

The head of Hyundai’s largest U.S. dealership, Scott Fink, had mixed feelings about the company’s decision to introduce a new pickup and more crossover SUVs in the U.S.

“We are optimistic about the future,” said Fink, chief executive of Hyundai in New Port Richey, Fla. “But we are disappointed that we don’t have the products today.”