Hyundai Motor will cut commercial vehicle production and transfer workers to other production lines to cope with the slow domestic demand for medium and heavy trucks, the automaker said Wednesday. 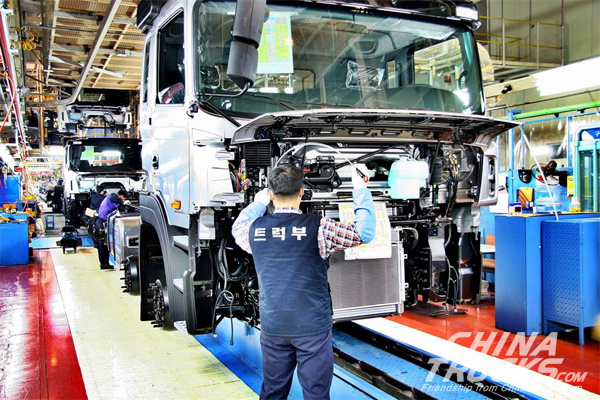 Management and labor recently agreed to reduce truck production at the Jeonju factory in Wanju, North Jeolla Province, to eight units an hour from 12.39.

They also reached a compromise on the transfer of 300 employees.

Among them, 210 will work at other production lines in the factory, while the remaining 90 will move to Hyundai's factories in Ulsan and Gwangju.

According to Hyundai, the measure will affect the lines of medium- and heavy-duty trucks, which are mainly used as tractor-trailers, cargo trucks and dump trucks.

The Hyundai Porter, which can carry a ton of cargo, is not affected because the vehicle is produced at the Ulsan factory.

"The recent decision is a countermeasure to the falling truck demand, which is caused by a decline in container port traffic and a slump in the domestic construction industry," a Hyundai Motor official said.

Data compiled by the Korea Automobile Manufacturers Association showed Hyundai sold 25,017 medium-duty trucks between January and September, down 15.4 percent from a year earlier.

The company sold 4,424 heavy-duty trucks during the period, a 28.1 percent decline year-on-year.

Amid worsening profitability, the automaker temporarily suspended operation of a production line for medium trucks from Mar. 26 to 30.

In July, it unprecedentedly transferred 47 workers from the Jeonju factory to the Kia Motors Gwangju factory.

According to industry officials, Hyundai is not the only truck maker suffering from falling demand.

In addition, 1,000 employees of Tata Daewoo working at the company's Gunsan factory in North Jeolla Province had to take leave for a couple of weeks during summer as the automaker could not afford to run the factory amid plunging sales.

Foreign truck makers, such as Volvo, MAN, Scania and Daimler, are going all out to narrow the price gap between their trucks and those made in Korea.

Some of them are offering discounts up to 30 percent to clear their inventories of medium and heavy trucks. (www.chinatrucks.com)