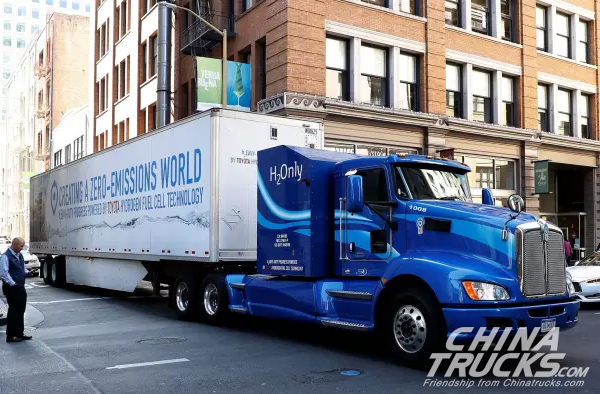 It comes at the wake of Hyundai recently unveiling a render image first look of its futuristic truck that runs with a fuel cell powertrain. This truck is considered to be a milestone in Hyundai’s relentless pursuit of the hydrogen fuel cell technology.

“Hyundai Motor has continuously made successful steps to shift from combustion engine vehicles to zero-emission vehicles over the last three years. We are now expanding our eco-friendly vehicle lineup in the medium and heavy-duty segment,” said Maik Ziegler, director of commercial vehicle R&D strategy group at Hyundai. “This supports the sustainable growth of the company and is the opportunity to enter the global market with our superior eco-friendly fuel cell technology.”

True to this, Hyundai has been a member of the Hydrogen Council, a global initiative that creates an ambiance for industry stakeholders to work on transitioning from conventional energy sources to hydrogen fuel cells. “This is a global initiative to grow the environmentally friendly hydrogen business. Hyundai serves as a co-chair since 2017, and we are cooperating with many governments and different companies with the goal of market expansion of hydrogen and eco-friendly vehicles on a global scale,” said Ziegler.

The fuel cell electric truck that Hyundai is developing now features two 190 kW hydrogen fuel cell systems coupled in parallel, and has a range of around 250 miles. That being said, there are many distinct advantages to opting for a hydrogen fuel cell over a lithium-ion battery cell, especially in the case of heavy commercial vehicles like trucks. For one, fuel cells are lighter and occupy far lesser space than its battery counterpart, providing vehicles with more space and also a higher range.

Charging of electric vehicles has been long cited as an issue that prevents the phasing out of diesel engines, as batteries take a minimum of six hours to be fully charged, leading to long waiting times at charging points. Fuel cells negate this, as it takes only about five minutes for a full charge, a time frame that isn’t out of place at gas stations. And like with battery powered vehicles, hydrogen fuel cells are zero emission as well, with significantly lesser noise levels compared to a combustion engine.

Another obvious advantage of fuel cells is it dispels the need for building out expensive grid infrastructure. Electricity used for charging battery cells are usually coming in from thermal power plants or renewable energy sources like wind and solar power plants. The issue with the latter is that these energy sources are inconsistent, with electricity generated from them coming in peaks and ebbs. To handle the fluctuation, governments would have the added responsibility to build grids with oversized capacities, making it a costly affair.

Hydrogen fuel cells could be a way out, as it allows the possibility of converting electricity into hydrogen, storing and eventually re-electrifying it when needed. This makes the availability of electricity more flexible, and offers a sustainable and feasible alternative for powering heavy-duty commercial vehicles.

Hyundai has already introduced fuel cell powered buses in South Korea, during the PyeongChang Olympics and is now in the midst of a pilot run across Korea’s major cities, with plans for mass production by 2020. The company has already launched taxis and car-sharing services powered by fuel cells, which now operate across public roads in Ulsan and Gwangju. (www.chinatrucks.com)