FAW to Set up Assembly Plant in Zimbabwe

www.chinatrucks.com: One of the world’s leading automotive manufacturing companies, FAW Group Corporation is in the initial stages of setting up a vehicle assembly plant in Zimbabwe this year. 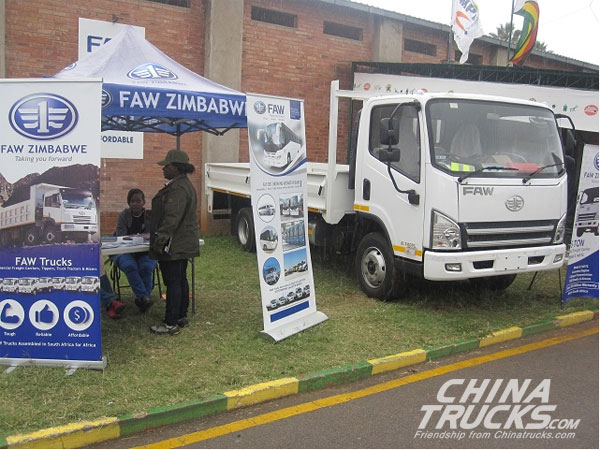 The FAW Group Corporation stand at the Zimbabwe International Trade Fair
This planned development is expected to boost Government’s efforts to revive the country’s motor assembly industry. In an interview with Sunday Business at the Zimbabwe International Trade Fair on Thursday, FAW Zimbabwe sales administrator Mr Patrick Masocha said the Chinese headquartered company, which also has operations in South Africa had agreed in principle with the Bulawayo City Council to set up a vehicle assembling plant in Bulawayo.
The company recently opened a showroom and offices in Bulawayo in addition to the one it has been operating in Harare over the last five years.
“We want to set up an assembly plant in Zimbabwe before the end of the third quarter of this year. The company is looking at investing a substantial amount of money in infrastructural development and purchasing of machinery. We are also looking forward to employing between 150 and 200 people,” he said.
Mr Masocha said although business was at its lowest due to the prevailing liquidity crunch and the general decline in the country’s economic performance, FAW Zimbabwe is confident of grabbing a large chunk of the market.“As a company we are optimistic that the country’s economic fortunes will change for the better thus the reason we intend to invest through setting up an assembling plant. We opened shop in Bulawayo at the backdrop of many companies either closing shop or relocating to Harare, it shows the confidence we have on the local market.
“Our parent company manufacturing plant is headquartered in Changchun and not in Beijing and the one in South Africa is in Port Elizabeth instead of Pretoria and us setting up an assembly plant in Zimbabwe, we will be replicating the same trend whereby we don’t necessarily have to base in capital cities,” said Mr Masocha.
He said the setting up of the vehicle assembly plant by the company would have a positive impact on Zimbabwe’s downstream industries.“We expect the opening of our assembly plant to stimulate other industries mostly downstream industries such as rubber and glass manufacturers as well as leather products manufacturers.“There are a lot of leather companies in Bulawayo and hopefully we will be able to give business to all these industries including the National Railways of Zimbabwe because we expect it to haul most of our bulk material,” said Mr Masocha.
FAW Group Corporation is a Chinese state-owned automotive manufacturing company headquartered in Changchun, Jilin, China. Its principal products are automobiles; buses; light, medium, and heavy-duty trucks; and auto parts.
FAW became China’s first automobile manufacturer when it unveiled the nation’s first domestically produced passenger car, the Hong Qi, in 1953.
FAW is one of the “Big Four” Chinese automakers alongside Changan Automobile, Dongfeng Motor, and SAIC Motor.
In 2014, the company ranked third in terms of output making 2,7 billion whole vehicles and in 2015 the company made total sales of 18 million vehicles worldwide.
Related China Trucks News
Do You Want Any Help?