www.chinatrucks.com: At some point in the next decade, driverless trucks in Australia will make the jump from mine sites to main roads. When that happens, transport experts predict big gains for road safety and freight economics, but disruption for some of the nation's 190,000 truck drivers.

For other road users, driverless trucks will usher in the era of "platooning" -- what used to be called convoys -- and the prospect of driving down a highway alongside four trucks nose-to-tail, with just the barest of gaps between them.

Platooning offers the potential for big fuel savings through reduced drag, with a lead truck and driver controlling the movements of the driverless vehicles tucked in behind. Without the need for the three-second gap that covers a driver's reaction time, these trucks sit just a few meters apart at a constant speed, presenting a streamlined profile that can mean fuel savings of up to 15%.

Small-scale platooning is already in use in Europe, where truck makers such as Scania, DAF, Iveco, MAN, Volvo and Daimler are working with technology companies and research centers to bring autonomous trucks and vehicle-to-vehicle communication to commercial reality as quickly as regulations allow.

Similar work is underway in North America (through ride-sharing company Uber's subsidiary Otto), and in Asia, where Japanese makers Hino and Isuzu and China's FAW Jiefang are developing driverless trucks. Volvo is testing an autonomous truck in an underground mine in Sweden. Elsewhere, they are being used in other controlled environments such as the port of Rotterdam -- and soon, in Singapore -- and there are various tests of driverless buses underway around the world, including in Australia.

A FAW Jiefiang driverless truck on a road in China. (Photo courtesy FAW Jiefang)The general consensus is that the next 10 years will determine how quickly fully automated trucks become prevalent. McKinsey & Company said in a study last September that a third of all new premium trucks in the West would have Level 4 automation -- meaning self-driving on highways -- in 2025. 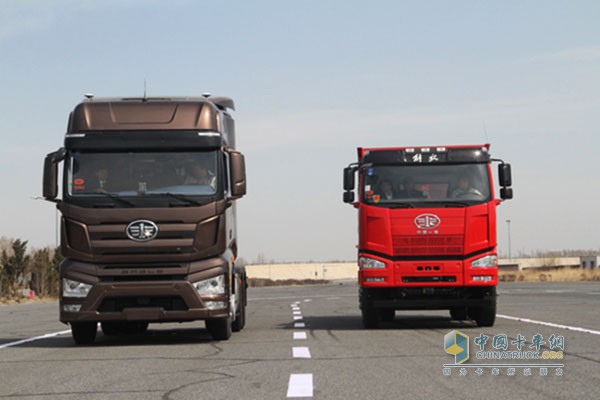 FAW Jiefiang driverless truck on a road in China

In March this year, Otto co-founder Lior Ron told a technology conference in San Francisco that the U.S. would see broad deployment of driverless trucks within the next 10 years. Navigant Research reported in April that it expected the adoption of fully automated trucks would begin "in the next decade."

A report on driverless trucks released by the Paris-based International Transport Forum on May 31 said automation would reduce freight costs, cut exhaust emissions and make roads safer, but the impact on driver jobs globally would need a "managed transition." It said driverless trucks could reduce the demand for drivers by 50-70% in the U.S. and Europe by 2030, with up to 4.4 million trucking jobs becoming redundant.

Australia is a relatively small truck market, but its driving conditions and long distances between its major population centers make it ideal for testing autonomous truck technology, according to Rita Excell, executive director of the Australia and New Zealand Driverless Vehicle Initiative, an industry cooperative body.