www.chinatrucks.com: When FAW Vehicle Manufacturers SA introduced its 8.104 FL medium-segment truck in South Africa last year, it created a stir with its low retail price, but the vehicle also forms part of the company’s goal-driven strategy further north into the continent, beyond the SADC region even. 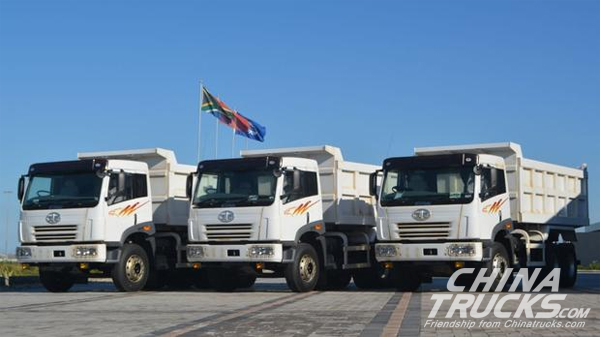 “There are many advantages of sourcing FAW products from our South African base – the most important being time-to-market in the northern countries, and of course for the SACD and AU, the added advantage which comes from the import/export duty agreements,” CEO Yusheng Zhang explained.

From the cost point of view, the African buyer can save complete vehicle import duty from 25% to 40%. Another advantage importing through FAW SA is that customers can get their vehicles within 30 days of order; much sooner than from China, which normally requires three months between order placement and delivery.

“Besides the special South African-spec vehicles, we also supply specifically modified vehicles for Africa. An example of this is the specially configured units which we exported early this year to Kenya – the five FAW J5P truck tractor units. Tanzania is able to use the same vehicle, and delivery of these orders are being finalised as we speak,” said Zhang.

“However, we remain circumspect on the drastically changing our local production complexity by adding too many different models produced at our Coega-based plant. It remains in our interest to keep our production plant simple, and to continue to maintain the highest levels of quality, rather than chase huge production diversity without adequate up-skilling and possibly a loss of focus on our core value – ‘Quality at a Fair Price,“ affirms Zhang.

Vehicle Manufacturers SA does act as an import conduit on models not built locally.

For example, in 2014 the Kenyan dealer sold about 650 FAW units of which the best sellers were the 6x4 truck, called CA4322. This model is their No.1 in their extra-heavy tractor segment, produced in China, and brought in through South Africa. To date the Kenyan dealer has purchased 45 units through FAW SA.

The Tanzania dealer sold about 1 000 units in 2014 of which their best sellers were the 6x4 tractor and 6x4 15m3 tippers. While most of the 2014 sales units were imported directly from China, the Tanzanian dealer has started this year to import a small number of trucks through FAW SA. So far, seven units have been dispatched from Coega, near Port Elizabeth, where the trucks are either assembled from CKD packs or come in as FBUs for export to Tanzania.

“For aftersales support, FAW SA is already supplying parts to those African dealers who import SA-spec models. Dealer who import African-spec models from FAW SA, still source their parts stock from China directly, because the purchase process is familiar to them and uptime in not affected.”

This expansion into Africa also requires some support in customer workshops and customer technical training. FAW SA continues to give Africa dealers full technical support where needed. “Besides it is much more efficient than sending their technicians to China to get trained or to wait for FAW China to come to Africa to sort the technical problems,” adds Zhang.