www.chinatrucks.com:The Belarusian automobile engineering company MAZ and the Chinese engine manufacturer Weichai Power intend to build the joint venture OOO MAZ-Weichai in the China-Belarus industrial park Great Stone. The factory will start batch producing engines by the end of 2018, BelTA learned from Dmitry Katerinich, Director General of OAO MAZ, the managing company of the holding company BelavtoMAZ, after the groundbreaking ceremony at the construction site on 13 September. The factory will occupy 2.5ha. It will make diesel engines for trucks, special vehicles, and buses. “We are going to open the factory on 8 November 2018. The first engine will be made the same month. Batch production will begin by the end of 2018,” said Dmitry Katerinich. 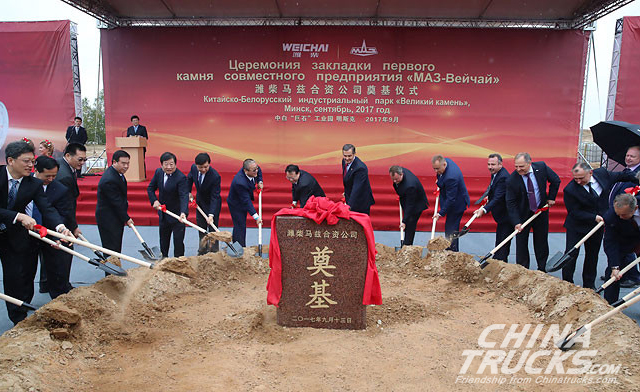 The executive also noted that MAZ is one of the few automakers without an engine factory of its own. “We now makes vehicles compliant with Euro-5 and Euro-6 standards. Such vehicles need good aftersales service and diagnostics. We need to spend huge resources on buying diagnostic equipment. Without an engine of our own we are facing huge risks. We will consider making not only engines in Belarus but the entire power train,” said Dmitry Katerinich.

As far as the financial side of the project to set up the joint venture is concerned, the executive noted that for now MAZ's share will be 30% while the Chinese company will contribute 70%. “We've decided to create a large charter capital — $20 million,” he added.

Deputy Prime Minister of Belarus Anatoly Kalinin added that engine production is a strategic project for MAZ. “All the conditions will be enabled for commissioning the engine factory on time — in November 2018,” he assured. 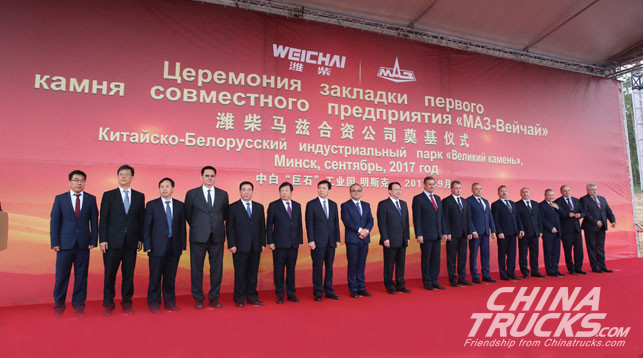 The joint venture will be located in the China-Belarus industrial park Great Stone and therefore will enjoy all the available preferences. The factory is designed to make at least 20,000 engines per annum. Initially the factory will operate in one shift. It will switch to two shifts once it makes 10,000 engines per annum. The power of the engines will vary from 220hp to 460hp. The engines will be more durable than competitors' and will be able to work for at least 1.2 million km of mileage before repair. The trucks the engines will power will be granted free maintenance after 40,000km while other brands offer maintenance after 30,000km.

The joint venture will be able to fully satisfy MAZ's demand for diesel engines. There are plans to export about 30% of the output.

China will be the sole provider of components initially. The manufacturing of components will be localized step-by-step later on. Belarus will initially make external components, mounted equipment and non-essential parts. Later on localization will move on to basic components, which will be machined by Belarusian companies.

Minsk Automobile Plant (MAZ trademark) was established in 1944. The company uses a complete manufacturing cycle to make trucks, passenger vehicles, trailers, and special vehicles. The company has designed and assembles over 500 models and 3,000 modifications of vehicles, over 55 models of trailers and semitrailers.

Wechai Power's first factory was established in the Chinese city of Weifang in 1946. At present the company employs over 12,000 personnel, including 2,500 engineers. The company can make 900,000 engines per annum. The company is one of the world's largest manufacturers of engines for trucks.