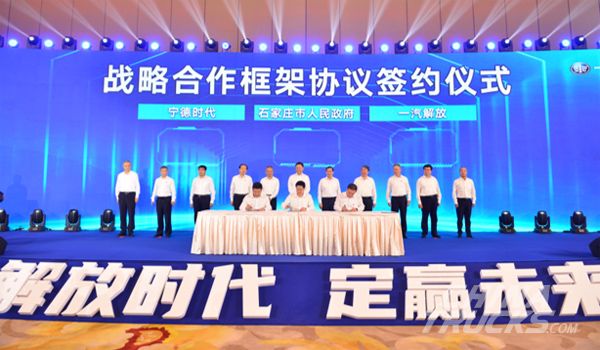 Through the JV, FAW Jiefang will work closely with CATL in the business of new energy vehicle sales, separation of vehicles and battries (including operation of battery swapping stations), vehicle leasing and used vehicle trading. The two parties aim to jointly build an ecological chain for new energy trucks to support the city's transition to electrification. The first battery-swapping stations are scheduled to start commercial operation in December this year.

By 2025, the JV is expected to generate 1.5 billion yuan in revenue, build more than 5 city-level battery-swapping networks consisting of 100 stations, and be able to support the operation of 20,000 new energy vehicles, and create 100 million yuan in tax revenue and more than 1,000 jobs.

FAW Jiefang is the truck subsidiary of FAW Group, a leading Chinese automaker. Founded in 1953 and headquartered in northeastern Jilin Province, the state-owned FAW Group is known as the cradle of China's automotive industry.